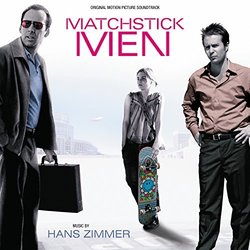 Performed by
The Hollywood Studio Symphony / The Santa Monica Synthphonia

In my opinion, Matchstick Men was one of the best films of this past summer - not to mention one of the most overlooked. The film, sadly, was not welcomed completely with open arms by audiences, which is a shame for a number of reasons. One of those many reasons is the fact that people missed out on experiencing one of the most original and innovative scores I've heard from Hans Zimmer, or any other film composer for that matter.

First, let me say what an original and creative score this is! It's funny, it's sad, it's dangerous, it's quirky - it's all of these things wrapped up into one delightful listening and viewing experience. Matchstick Men is about a small-time con man named Roy (played perfectly by Nicolas Cage) who is dealing with obsessive compulsive disorder, his partner in crime Frank (brilliantly played by Sam Rockwell), and his fourteen-year-old daughter (played by the wonderful Alison Lohman) from a previous marriage who he recently found out existed.  The movie is many things, much like the score: moving, funny, intense, and charming. With this vast difference in tones and styles in a single film, Hans Zimmer has made it look easy to score this type of film.

In the first track of score, "Ichi-Ni-San," and most notably "Ticks & Twitches," we are given a taste of the absurdities and idiosyncrasies of Roy and his obsessive compulsion. In the track "Matchstick Men," we're given a glimpse as to the relationship between Roy and Frank, as well as the distinct sound of the con.  (Editor's note: Music from Nino Rota's score to La Dolce Vita is used in Zimmer's score.) "Keep The Change,"  "Carpeteria," and  "Nosy Parker" give us clues as to Roy's relationship with his daughter, Angela - sweet and light, yet somewhat distanced and menacing. All of the other tracks appropriately add mood and feeling to the other parts of the film - my personal favorites are "Pool Lights" and "Pygmies!" The other songs included on the album are excellent as well. Specifically, Bobby Darin's song, "The Good Life," whose lyrics sum up the film. You'll understand when you see the movie.

My only disappointment with this album is the lack of any and all of Frank Sinatra's songs in the film. Other than that, I found the viewing and listening experience of Matchstick Men to be extremely enjoyable. I can't say enough good of this film. Hans Zimmer and Ridley Scott have truly married wonderful music with a wonderful film.

Now all you have to do is go and see it.