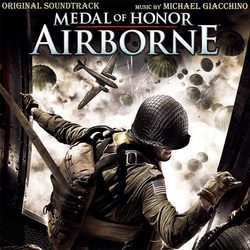 Michael Giacchino\'s career has taken off in the past few years due to high-profile projects such as "Alias", "Lost", and The Incredibles. However, his first big success was for the Medal of Honor game franchise, scoring the first three installments between 1999 and 2002. Once other projects began to take up his time, Christopher Lennertz took over the scoring duties. Now, four years later, Giacchino returns to Medal of Honor for the latest installment, Medal of Honor: Airborne. His growth as a composer is clearly evident in the score and it is without a doubt the most exciting and thematic score of the series.

Appropriately, the tone of the Medal of Honor scores follows John Williams\' Saving Private Ryan, though much faster-paced. Airborne has a style more akin to Williams\' military scoring for the droid armies in the Star Wars prequels. With Giacchino\'s previous Medal of Honor scores, I often felt that he did not employ the use of his spectacular main theme enough. With Airborne, not only did he develop a new main theme based on the original one, but he also uses the MoH theme quite often as well. The Airborne Main Theme introduces the new theme, which is a fast-paced variation on the MoH theme, originally introduced at the beginning of "Operation Market Garden" from the Frontline score. Like many of the operation sequences in the Medal of Honor games, they are based on real military operations. For example, the Nijmegen cues on this album are part of the Operation Market Garden sequence begun in Frontline, which is one reason for the thematic overlap. The energetic Airborne main title builds up to a heroic statement of the main MoH theme at the end.

Action sequences, such as "Operation Husky" and "Gunfight in the Ruins" contain full orchestral bombast on a grand scale, with both subtle and bold statements of the variety of themes Giacchino has for the franchise. Other cues are quieter, with light percussion, such as "Restoration Temple", but hints of the themes are still present in background brass statements. Some statements of the main MoH theme are very subtle, such as at the end of "Room by Room", which has a slowed down statement of the theme in the brass over racing strings. A break in the action comes with "Unblocking Utah", one of the highlights of the album. This cue features soaring strings and trumpets over a low string line. It builds to a triumphant statement of the main theme, the first full one on the album and will bring a smile to any fan of these scores.

Giacchino\'s main themes are impressive, but the meat of the score is comprised of smaller motifs and thematic elements. An example of this is the percussive low string line that runs throughout the score in a variety of forms. This is most apparent in tracks such as "Operation Varsity" and "Sniper Showdown". There is usually brass statement of one of the main themes at some point over these bass lines, but these motifs drive the pace and tone of the action sequences. Other tracks are driven by percussion, such as "Dropping into Nijmega" and "Taking Out the Sighting Tower". The latter also features an additional variation on the main themes.

The album ends with "Paestum Landing" (interestingly, I found a bullet casing from that landing during an excavation at the Roman site outside Paestum). This cue features a restrained statement of the main MoH theme in the strings with a brass countermelody. The overall tone is reminiscent of Goldsmith\'s Air Force One, also featuring parachutes. The cue makes for a nice finale and builds in the racing string line from the main title into the very end. The End Titles and two bonus tracks (for iTunes purchases) follow. Giacchino\'s return to the Medal of Honor franchise is indeed a heroic one and the result is the most energetic Medal of Honor score to date. While it lacks the vocal and choral elements of previous scores, it greatly furthers the thematic development of the game franchise.