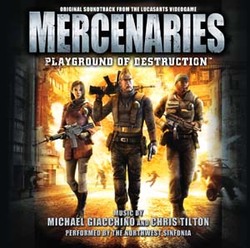 While he passed the Medal of Honor video game series on to Christopher Lennertz, 2004 could be seen as Michael Giacchino's busiest yet. While continuing to write music for the Call of Duty video games and the hit television show "Alias", Giacchino also picked up J.J. Abrams' new television show, "Lost", and scored his first major motion picture, The Incredibles, along with an alternate score for the Incredibles video game. Therefore, it should be no surprise that for his other 2004 project, the LucasArts video game Mercenaries, Giacchino composed the original themes, then turned the project over to his longtime assistant and aspiring composer, Chris Tilton, who wrote the score. The music was performed by the Northwest Sinfonia.

Mercenaries is a third person action game set in the near future in North Korea. Giacchino and Tilton's approach was to create different themes and orchestral sounds for the different military factions involved in the game. Not only does this work extremely well in the music, but it remains consistent through the whole score. Writing music for a video game is difficult, as each player takes a different route. Making the music carry a consistent sound and theme throughout the score is harder than in film. However, the main theme for Mercenaries is worked into the music very well in multiple ways and in varying orchestrations. One orchestral technique is the use of Taiko drums. These Asian percussion instruments appear in the "Mercenaries Main Theme", "Destination: DMZ" and "Deck of 52" as background beats. In "Honor and Strength", the Taiko are the primary orchestration with a fue (Japanese flute) floating over their ensemble. The Taiko arrangements are well done, with different sized drums giving varying-toned beats as well as ka strikes on the sides of the drums and kiai vocals that bring the cue to a close.

The main theme is bold and very appropriate for the soundscape of a war zone where players have to recover bounties in this open-design game. The theme reappears in multiple variations in "Allied Nations" as well as other bold action cues such as "Trains, Planes, and HMMWVs". A highlight of the action music on the album is "Swedish Fireballs", which races along with timpani and strings with trombones and horns soaring above. A variation of the main theme is also passed between the brass and strings before a trumpet picks up the theme and closes the track. There are some quieter moments to the score as well, such as "For the Motherland", which has a classical feel to it with a small string section and harp performing the majority of the cue, which I believe is part of the Russian militia sound. Another break in the action music is "Hidden Valley Bunker", which uses a full choir and female soloist who perform in Latin over further Taiko beats and a plucked string percussion effect.

The action climaxes in "Thermal Event" and "Countdown" with full brass performances of the main theme and another appearance by the choir in Latin. It is hard to imagine the music getting bolder than the first part of the album, but here it does and these two cues are simply stunning. "Countdown" then segues into the quieter "The Blinding Flash", which is a serene, almost sorrowful cue that again reorchestrates the main theme. Giacchino's Incredibles received critical acclaim for its jazzy action feel, but I feel that Mercenaries is as good, if not better. While maintaining a consistent theme, Tilton works Giacchino's militaristic theme in multiple ways and is able to write a diverse score at the same time. Giacchino's Medal of Honor scores helped video game music gain more interest and scores like Mercenaries only push the envelope further.