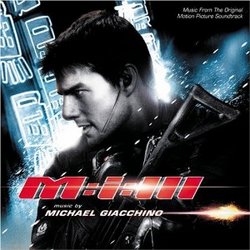 Mission: Impossible III is Alias creator J.J. Abram's first feature film, and for this latest Tom Cruise adventure, he brought along his previous team of collaborators, including composed Michael Giacchino. With Alias, which was basically a female version of Mission: Impossible, Abrams and Giacchino showed that they were able to provide the type of energy necessary to sustain a film like Mission: Impossible III. It's not surprising, therefore, that the music for the film would not only provide the expected nods to Lalo Schifrin's original themes, but also sound like a beefed up score to Alias.

The soundtrack, released by Varese Sarabande, starts out with the End Title treatment of Lalo Schifrin's theme. The 112-piece Hollywood Studio Symphony blasts away, and the arrangement that Giacchino has done has a bit of a dark string countermelody which sets his apart from the previous films' renditions. The M:I theme will show up quite a few times throughout the score, used in various ways—some obvious, and some subtle.

"Factory Rescue" starts out with a version of Schifrin's theme for "The Plot," but Giacchino takes it and builds upon it with his new IMF Theme. This bold theme is fresh, but fits quite nicely in the Mission: Impossible world. The first ten minutes on the album is filled with lots of pounding action, driving ostinatos, and tense climaxes. It's one hell of a ride, and by the time we finally get to "Special Agent Lindsey Farris," you feel like you need the break. Giacchino writes a tender piece here, heard on strings and then French horn. Next up is the love them that he wrote for "Ethan and Julia," which we won't hear again until the end of the album with "Reparations." It's a soft piano-based melody that is reminiscent of his Emmy-winning work on Lost.

Between those two tracks lies a rather hearty majority of the album that is filled of non-stop action and tension, which can actually feel a bit daunting at times with the unrelenting pace at which the action comes at us. Schifrin's M:I Theme is spattered through much of the Vatican sequence in the film amidst Giacchino's IMF Theme. "Humpty Dumpty Sat on a Wall" is a great track that sets up the whole infiltration sequence, and then the mission continues with "Masking Agent" (which includes a unique 7/8 version of Schifrin's M:I Theme) and "Voice Capture." "See You in the Sewer" is probably the most fun, with large James Bond-like punctuated brass backing an exciting arrangement of the M:I Theme.

A motivic ostinato for Owen Davian (Philip Seymour Hoffman) is first heard in "Davian's Brought In," a tense track that brings us to the climactic "Bridge Battle." Ostinatos abound here, including Davian's Ostinato, with blaring brass and plenty of climactic moments. With "IMF Escape" Giacchino features his metal anklung over a string-harmonic version of the M:I Theme. As Hunt makes his escape from IMF Headquarters, a rhythmic version of the IMF theme can be heard amidst the action.

The film takes us to Shanghai, where Giacchino ignores any Asian references in the music, but rather continues with the tension ("Shang Way High") and high energy ostinatos ("Hunting for Jules"). Things finally come to a close with "World's Worst Last 4 Minutes to Live," which features Davian's Ostinato, and a variation on the IMF Theme in the brass.

The action is finally all done, and with "Reparations," we're given a chance to breathe again as the Love Theme is heard on soft piano, and then a sweeping melody in the strings. The last track on the album ("Schifrin & Variations") is a recording of the demo suite that Giacchino wrote last year, and features a rendition of the M:I Theme, including a different countermelody in the strings that Giacchino apparently abandoned when writing his score. It's a nice bonus track, and doesn't appear anywhere in the film—but gives us a nice close to the album.

Blessedly, the horrible Kanye West song is not on the soundtrack, and although there is about 30-minutes of additional score that is also missing, I don't think it would have made the album any better. Running 65-minutes long, this album is one hell of a ride. In fact, it might be just a bit too long. The sustained action music works great in the film, but can be a bit draining to take in all at once as a soundtrack listen. The lack of variety is not Michael Giacchino's fault, but rather the film's. He delivered exactly what he was supposed to do, and wrote a score that sounds distinctly like his own, with plenty of respectful and appropriate nods to Schifrin's material. It's one of those cases where the score works gangbusters in the film, but on CD might just be more than one can take in one sitting.