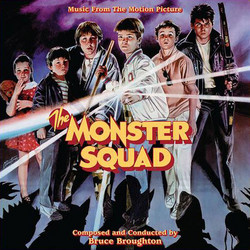 Composer Broughton's powerhouse orchestral score emboldens the titular pre-teens and teens as they heroically square off, (with a little help from Frankenstein's Monster), against none other than Dracula, The Wolfman and more! Scary, wondrous, thrilling and heartwarming, Broughton's rich score bursts with fun and derring-do excitement! Produced by Dan Goldwasser and Mike Matessino, and meticulously edited and remastered by Matessino from newly discovered 1/4 inch master tapes, this special release showcases the film version of the score, along with additional tracks—including alternate cues, source music, and the premiere release of the film's songs "Rock Until You Drop" and "Monster Squad Rap." Liner notes from writer Daniel Schweiger and monstrously fun art design by Dan Goldwasser round out this must-have for all film music fans! It's a CD release with 'nards!