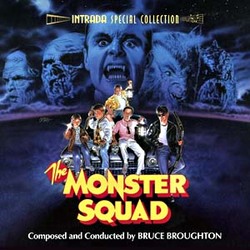 I have to admit upfront that I have never seen the film The Monster Squad. Maybe when it was released in 1987 I felt it just didn\'t appeal to me at the age of 14 or I thought it was a Goonies rip-off. Or maybe it was because Bruce Broughton was not on my radar of film composers to follow as much as Williams, Horner and Goldsmith were at the time. Or perhaps it simply never made to the dinky theaters near where I lived. Whatever the case, I have since learned that both the film, directed by Fred Dekker, and the score gained quite in loyal following in the subsequent years, thus making this deluxe, fantastic sounding limited edition CD release from Intrada something for its fans to really celebrate.

Bruce Broughton had been riding quite a wave of symphonic success since his 1985 Oscar nomination for the bustling Western score Silverado. It put him on the map cinematically after years of television work and mostly forgettable films. More prominent fare followed and even if they did not all reach the same critical heights as Silverado, projects such as Harry and the Hendersons, The Boy Who Could Fly and Young Sherlock Holmes proved Broughton was a master at crafting distinctive, melodic and kinetic orchestral music for films which needed such support and thus these strong genre projects garnered him a long-lasting fan base. Only in recent years have we begun to see much of his best work finally preserved on disc, a welcome reward for years of patience.

The Monster Squad fits nicely into the same category as the aforementioned titles, but with an extra tongue-in-cheek, over-the-top quality meant to evoke the shocks and high tension of the old horror films from Universal. As the film features the classic creatures Dracula, Wolfman, Mummy and Frankenstein\'s Monster in a test of wills and skills with a set of kids, this approach is warranted. "Main Title/The Van Helsing Prologue" jumps right to forefront with a discordant bang, leading into a well-developed, lengthy section exploring the main theme, which falls and then rises diatonically like a spooky mist on the moors. Basses lumber away, set against high strings and trumpets before full-blooded action races onto the scene. Suspense and more kinetic action alternate in both "Bats in the Hold" and "Lock Me Up! / Wolfman Wakes Up".

A sign of the 80\'s times pops up in the perky synths rhythms of "At Phil\'s" while swirling strings and threatening brass dominate "Class Reunion". Spooky harp, flute and string driven suspense carry several subsequent tracks forward, with a brief pause for a noble brass motif in "Mr. Alucard" and a moment for tender piano, harp and flute in "Walking Dead Guy". Brighter textures again try to rise to the surface in "Scary Mask / Phil\'s #1", but the basses, tremolo strings and alto flutes bring back the danger, this time augmented by female chorus, all before the 80\'s synth pop returns.

"Recovering the Amulet" begins the expansive third act of the album, first led by wondrous harp and choral textures but then replaced with agitated strings, piano and muted horns joined for deadly attack. Of course, even when the music is at its most discordant or aggressive, Broughton still keeps in play the element of fun and balancing between the horror and humor of the predicaments. Some bombastic, scenery-chewing action of the Silverado variety, i.e. low brass, snares and xylophone, charges through "The Vampire Killed/Kill A Wolfman" and the near 10-minute track provides the main theme its largest statements, battling it out with the harp & choral amulet motif, as well as the noble brass motif first heard in "Mr. Alucard" and some soaring major key phrases. There is an exciting build-up to its close, although I admittedly expected a more flourishing crescendo along the lines of The Rescuers Down Under but what\'re gonna do?

This will certainly be a must-have for fans of the film and Broughton\'s large-scale orchestral works, though I still prefer the harder edge found in his music for Tombstone, The Shadow Conspiracy and much of Lost in Space. Either way, there is a lot of winning material, well worth a listen.