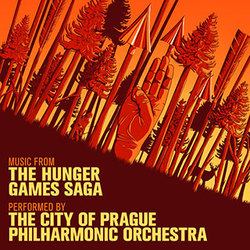 Music from the Hunger Games Saga

Performed by
The City Of Prague Philharmonic Orchestra

The fifteen tracks assembled here from the film series, in this unique set, highlight his epic composing skills. Performed by The City Of Prague Philharmonic Orchestra, one of the most respected and recorded orchestras in the world, this collection represents some of the most skillful and exquisite symphonic music in cinema today.