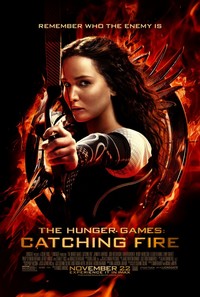 2012's The Hunger Games was a huge hit, propelling actress Jennifer Lawrence into an even higher stratosphere, if that were even possible. Based on the hit novel by Suzanne Collins, the book (the first in a trilogy) told the story about Katniss Everdeen (Lawrence), who volunteers for the annual "Hunger Games" in which two tributes (one male, one female) from each of the 12 Districts have to fight to the death as part of the punishment for the uprising against the Capitol, which controls the Districts.

Continuing where the first film left off, The Hunger Games: Catching Fire follows Katniss as she tries to cope with life post-games. She's conflicted because she has feelings for Gale (Liam Hemsworth) but must publicly appear to be in love with Peeta (Josh Hutcherson), her fellow champion. Suffering from post-traumatic stress disorder from her experience in the arena, Katniss embarks on a "victory tour" with Peeta to all twelve Districts and the Capitol, accompanied by their eccentric handler Effie Trinket (Elizabeth Banks), former champion and mentor Haymith Abernathy (Woody Harrelson) and visionary costume designer Cinna (Lennie Kravitz). During the tour, Katniss catches glimpses of the tensions and simmering revolution that she unwittingly sparked when she showed her defiance in the arena.

Fearing a full-on revolution, President Snow tries to keep the Districts under his thumb by shutting down the black markets and implementing public floggings and executions of anyone showing signs of resistance. But it's not working and Snow realizes he needs to get rid of Katniss, who is seen as a symbol of the revolution. Plutarch Heavensbee (Philip Seymour Hoffman), the new Head Gamemaker, comes up with an idea for the 75th Hunger Games: the "Third Quarter Quell," where the participants will be drawn from the existing pool of former champions—meaning that Katniss would be the only female from District 12 in the lottery and forced to fight for her life once more.

The film then shifts into high gear as Katniss prepares once more for the games and we meet the champions from the other Districts. Some seem to be against Kantiss from the outset, like Gloss (Alan Ritchson) and Brutus (Bruno Gunn), but others are instant allies, like the mute elderly Mags (Lynn Cohen), possibly-insane Wiress (Amanda Plummer) and complacent Beetee (Jeffrey Wright). And some Katniss just can't get a read on, like the pissed-off Johanna Mason (Jenna Malone) and smarmy Finnick Odair (Sam Clafin). Once the games begin, President Snow is hopeful that the symbol of the rebellion will be killed by the various threats the arena has to offer, but Katniss still has a few tricks up her sleeve.

Gary Ross didn't return to direct Catching Fire. Taking over from him is Francis Lawrence, who had directed Constantine and I Am Legend, and I feel like it's a better film overall. With most sequels, character development is glossed over, since it's presumed you already know the characters—but in this sequel, we gain new insight into the emotional stress that Katniss is suffering with her conflicted feelings for Gale and Peeta, as well as her need to take care of her family. Effie is given new depth, and you can start to see how the strain of putting a smile on everything is probably killing her beneath the caked-on makeup. And the new characters are all interesting as well. Even the ones we don't care for initially inevitably grow on us. There's more at stake now—Snow is a cold and calculating antagonist who will stop at nothing to crush the rebellion before it has time to grow and even those closest to Katniss aren't safe from his reach. Plutarch Heavensbee is a somewhat detached and hard-to-read character, and Philip Seymour Hoffman is (as always) phenomenal and fascinating to watch. While Jennifer Lawrence is still the star and lead character, the real treat is watching the ensemble come together—from the group of characters in the lead-up to the arena, as well as the group of tributes. Screenwriters Simon Beaufoy and Michael Arndt really did a commendable job in squeezing as much out of each character as possible. It's a 'middle movie,' yet is paced like a traditional film, with a climax that you didn't see coming (unless you read the novels). In all, this is a really enjoyable film that sets things up nicely for the third (and fourth) films.

The Hunger Games: Catching Fire sports a very impressive HD image on Blu-ray. Shot on film with anamorphic lenses, the movie is presented in 2.40:1 widescreen aspect ratio, with high contrasts, good color saturation, and excellent detail. There's even the barest hint of natural film grain in some shots. When the movie enters the Arena sequence, the widescreen image opens up to the full 1.78:1 HD aspect ratio (basically a cropped version of the IMAX sequence), making an already great looking film even more immersive and detailed.

Audio is presented in a DTS-HD Master Audio 7.1 English track, which sounds absolutely stellar. This is a fully immersive sound mix, with clean and clear dialogue, and a large dynamic range that will give your subwoofer a nice workout. James Newton Howard's score works effectively, but never truly manages to stand out.

There are only a few supplements on this release of The Hunger Games: Catching Fire, but they were quite satisfying. First up is a commentary track with director Francis Lawrence and producer Nina Jacobson, which provides plenty of interesting tidbits and details about the development, production, and post-production of the film. Although there were a few occasional gaps where they're just watching the movie, I found the bits where they talked about how the film differed from the novel to be of interest, as well as the anecdotes they shared from the set.

The big supplement is a feature-length documentary, "Surviving the Game: Making The Hunger Games: Catching Fire" (HD, 145-minutes), which explores every aspect of the making the film. "A New Kind of Hunger: Continuing the Saga" (HD, 11-minutes) looks at development on the sequel, from Gary Ross' departure, to developing the script. "Visual Vocabulary: Building a World" (HD, 13-minutes) looks at concept art, locations and set design. "Stirring Things Up: The Cast" (HD, 18-minutes) looks at the returning cast members, as well as the new actors who came on board the film. "Fashion Forward: Costume, Make-Up & Hair" (HD, 17-minutes) looks at the impressive design work that went into the costumes and make-up (and hair), especially in regards to the Capitol's citizenry. "Let It Fly: Production in Atlanta" (HD, 15.5-minutes) goes into the first portion of the film shoot, and the challenges the cast and crew faced. "Moves and Countermoves: Stunts & Weapons" (HD, 20-minutes) looks at the impressive array of training the actors went through to be able to perform a majority of their stunts, as well as the custom-designed weaponry featured in the movie. "Tick Tock: Production in Hawaii" (HD, 14.5-minutes) explores the unique challenges faced with not only filming in a real jungle, but also with very heavy IMAX cameras. "Threading the Needle: Post-Production" (HD, 27.5-minutes) is a very in-depth look at the editing, sound and visual effects on the film. There are some nice bits with James Newton Howard recording the score at AIR Studios in London (this marks the third time he's worked with Lawrence). Finally, "The Revolution Lives: Reflections & Looking Forward" (HD, 9-minutes) looks at where the film ends, how the crew feels about it, and what we can expect from The Hunger Games: Mockingjay, Part 1.

Finally, while there are sadly no trailers of any kind, we are presented with five brief deleted scenes (HD, 4.5-minutes) and a sneak peek at the new film, Divergent (HD, 6.5-minutes). The Hunger Games: Catching Fire continues where we left off with the first film, but the characters are more detailed, the film more exciting and cinematic, and (as technically the 'middle' movie of a 4-film trilogy) it ends with some serious stakes being raised. Sporting a great presentation on Blu-ray, as well as a small but solid supplements package, Catching Fire easily deserves a place in your home video collection.