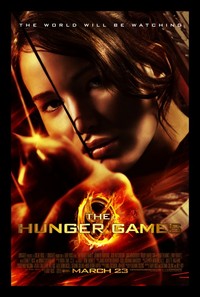 No, The Hunger Games is not like Battle Royale, with the exception of both books (and their film versions) depicting kids killing kids in some sort of sick and twisted "game." In the case of The Hunger Games, the film based on the first book in a trilogy from author Suzanne Collins, the story focuses on 16-year old Katniss Everdeen (Jennifer Lawrence), who lives with her mother and sister in the very poor District 12 of the post-apocalyptic country of Panem.

Living under the distant rule of the wealthy Capitol and President Snow, the twelve poorer districts work hard to provide the necessary materials to fuel the Capitol's excessive desires. There used to be a District 13, but after a failed rebellion, it was destroyed, and now the twelve remaining districts must pay tribute to the Capitol by sending up a boy and a girl picked by lottery to be part of the annual Hunger Games. The participants must then fight to the death in a controlled outdoor arena, with the lone survivor living in luxury back in their home district.

Her family barely surviving, Katniss has been sneaking into the woods with her friend Gale to hunt for game, and selling their catches on the local black market. When the time comes for the lottery, and Katinss' little sister Prim is chosen, Katniss offers to take her sister's place, sparing her sister. Also going to the Games from District 12 is Peeta (Josh Hutcherson), the son of a local baker, who once gave Katniss some bread when she and her family were starving.

We follow Katniss and Peeta as they encounter the very decadent lifestyle in the Capitol, and are introduced to their mentor, the alcoholic Haymitch (Woody Harrelson), a previous winner of the Games from their district. It's his job to help train them to try to survive the Games, while Effie Trinket (Elizabeth Banks) tries to keep their public image as glamorous and exciting as possible. It's during their training that Katniss' inner spirit starts to emerge; a rebellious nature that Games Master Seneca Crane (Wes Bentley) and President Snow (Donald Sutherland) are hesitant to let bloom, but when television personality and Games host Caesar Flickerman (Stanley Tucci)—and therefore the rest of the Capitol—is enamored with her, the powers behind the Games have little choice to squash her nature.

As an adaptation, The Hunger Games feels very rushed in some respects. The book is written in the first-person, and so a lot of the internal dialog that Katniss has with herself is lost, and a lot of things that happen in the film are done or shown with a lot of backstory missing. If you've read the books, you'll likely have a better appreciation of what's going on, but for the uninitiated it might seem a bit farfetched. We never truly get a sense of what life is like in the Districts or how close they are to rebellion. The depiction of District 12 is so tiny that it feels like the whole District is just one town square. We also know that the Capitol is garish and weird (as indicated by everyone's decadent costumes and gluttonous behavior), but we're not really given a reason why we are supposed to hate them—weird and quirky is not necessarily "bad." We are also supposed to feel like President Snow is evil, but he doesn't really do anything to make us fear him. I know that there's a lot more to come, given the two other books, but it just feels like there was a lot more backstory to convey.

Jennifer Lawrence is good, and has a strong screen presence, but it's not until one moment later on in the forest where she's burying a fellow Games participant that you really get a chance to feel her humanity. Banks is quirky, Harrelson is a good drunk, Tucci is as fun as ever, and Sutherland is cold and ominous—but it just doesn't feel like any of these characters are three dimensional.

The film has a pretty good look to it, but it's difficult to show the true violence (especially as described in the books) and maintain a PG-13 rating. Director Gary Ross employs the dreaded "shakey-cam" to maximum effect, which only works so well before becoming as annoying as it was when Paul Greengrass employed it to the extremes in the Bourne films.

The music is enjoyable, especially the bluegrass country edge that producer T-Bone Burnett came up with, placing a lot of songs that helped establish District 12's tone, and James Newton Howard wrote an effective and understated musical score.

A lot of soul is missing from this film. While fun to watch and never boring, it lacked an emotionality that came through in the novel. As a stand-alone film, The Hunger Games is decent, but hollow.

The Hunger Games comes to Blu-ray in a very solid contemporary 1080p presentation that is, for the most part, sharp and clear. Given Ross' penchant for shaking the camera to keep the audience excited, the image can appear a bit blurry, but that's intentional. For the District 12 sequences, colors are expectedly desaturated, indicating a bleak existence, with contrasts that border on blowing-out the white levels. Once we get to the Capitol, saturation returns to the colors, and the chariot sequence is probably the most vivid sequence in the film. During the Arena sequence, there's a predominance of green from the forest, but Ross (and cinematographer Tom Stern) keep things looking bleak by leaning towards the cooler side of the spectrum, and there is very little warmth in the image. A nice level of grain is ever-present in the image, retaining a naturalistic film-look without becoming overbearing.

The Blu-ray's audio is presented in English DTS-HD Master Audio 7.1, and it definitely delivers the goods. Dialogue is clear, and every scene has some level of ambient immersion going on, placing you right in the middle of what's going on. Sound effects surround you, and the music is well represented. The score by James Newton Howard is somewhat understated and folk-driven (mainly for the District 12 material), evolving to a more traditional orchestral mode during the Arena sequence. It fits well with the source material culled by T-Bone Burnett, and the "Horn of Plenty" theme used during the chariot sequence is certainly a memorable piece. There is also an English Dolby Digital 2.0 track included "for late night viewing," and a Spanish Dolby Digital 5.1 track rounds out the audio options.

Given that The Hunger Games is the first film of a trilogy, it is safe to assume a super-ultimate-collector's edition with tons of supplements is forthcoming, but for now, this inaugural release of the film still provides a rather hefty assortment of extras. There is no commentary track (sadly), and in fact, there are no extras at all on the main feature disc.

Instead, all the extras are on a second Blu-ray disc. The cream of the crop is the feature-length documentary, "The World is Watching: Making The Hunger Games" (HD, 122-minutes). This is a very solid look at the making of the film, starting with the book, working through casting, pre-production, production, post-production, and release. It features interviews with most of the key cast and crew members and, from a film music perspective, does a nice job talking about the music—even showing us some of the scoring sessions in London. Like the feature-length documentary on The Expendables, these extras showcase Lionsgate's commitment to exceptional and in-depth supplements.

In case the documentary wasn't enough for you, there are six more featurettes, each of varying interest. "Game Maker: Suzanne Collins and the Hunger Games Phenomenon" (HD, 14-minutes) looks at the literary origins of the film, and how the book and the film fed off each other's success, building into a crazy-huge thing. "Letters from the Rose Garden" (HD, 9-minutes) is an interview with actor Donald Sutherland talking about how he really immersed himself into the role of President Snow. "Controlling the Games" (HD, 6-minutes) looks at the creation of the "Game Center," which is only implied in the book, and how they came up with a creative design to portray it. "Preparing for the Games: A Director's Process" (HD, 3-minutes) is a quick bit with director Gary Ross talking about how he worked on the script a bit before shooting the film. Finally, "A Conversation with Gary Ross and Elvis Mitchell" (HD, 14.5-minutes) is an interview with Ross conducted by noted film critic Elvis Mitchell. It's slightly dry and academic, but it covers the process of making a book into a film.

Also included is a "Propoganda Film" (HD, 1.5-minutes), which appears in the background of the lottery sequence in the feature, and a "Marketing Gallery" containing three trailers, a poster gallery, and a photo gallery.

When it all comes down to it, The Hunger Games is a decent film. The book gives us more in the way of character development and emotion, and developing a first-person narrative into a feature film was certainly a challenge for the filmmakers. It's still an enjoyable film, even if it presumes too much on the part of the viewer, and I wish that they had focused a bit more on the characters so that we empathized with them more. It has a solid presentation on Blu-ray, and a pretty impressive first batch of supplements. If you're a die-hard fan who can't wait, by all means go pick it up —but it might be better to rent it for now and hold out for the inevitable trilogy box-set.