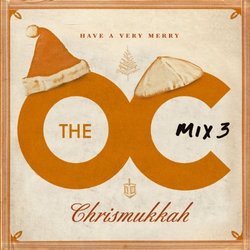 Music from The OC: Mix 3 - Have A Very Merry Chrismukkah

Review: Music from The OC: Mix 3 - Have A Very Merry Chrismukkah

I don't know about you, but I am not a fan of Christmas/Holiday albums. With the exception of the big band stuff, these albums are usually rote and uninspiring of anything. Not this time, though. We've all heard and perhaps cringed at WHAM!'s "Last Christmas" (I admit it, I love it). Jimmy Eat World resurrects it with a perfect blend of hat-tipping to the original, holiday cues, and Linton's signature voice.

As for the rest of the album, some highlights:

Low's "Just Like Christmas" - it's unassuming and a lovely enough song that I don't even mind the jingle bells in the background. Mimi Parker's voice could make me enjoy holiday CDs. Maybe.

Ben Kweller, "Rock of Ages" - first let me say that when I saw the title of this track on the back of the CD, I wondered two things: first, who in the world would have the nerve to cover this Def Leppard classic (stop laughing) and second, what the devil is "Rock of Ages" doing on a holiday CD? Good news - it's not a cover. Phew. Actually, it's a simple, uncluttered guitar and vocal song dressed in bluegrass. Kweller's tune would be as at home in an O' Brother-type collection.

Eels, "Christmas is Going to the Dogs" - the Eels have a child-like sense of humor that makes both of their contributions to the OC mixes quite a lot of fun. Even now, I can't help tapping my feet and dancing a long. I like these guys. Maybe it's just me, but I kept expecting them to break into "Iko Iko."

Leona Naess, "Christmas" - I am loving all of these pop, rock, and "alternative" (is it still alternative if it's so mainstream, now?) songs with string sections in their employ. And that it's done so well, makes me happier. Naess has a gentle voice well-suited to a quiet Christmas song.

I don't think you could do much better in the way of a holiday CD you'll want to keep around for a long time to come. Josh Schwartz and music director Alexandra Patsava are still batting a thousand with this latest offering. I almost wish they'd put out a terrible CD if only so I could dish out at least a little criticism.