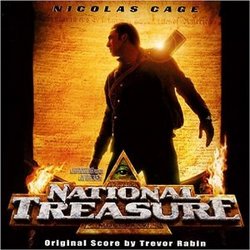 After stepping out of the film music limelight for a little while, Trevor Rabin bounces back with a loud powerhouse score to Jerry Bruckheimer's latest popcorn flick, National Treasure. While it is a fun score and an enjoyable listen, it is what one has come to expect from a Bruckheimer / Rabin collaboration. Rabin's scores from the late 1990's - Armageddon, Con Air, Gone in 60 Seconds, etc. - are classic examples of how Rabin melds orchestra and electronics to create a modern sound for action films. However, National Treasure delivers nothing new to the genre. The music is effective in highlighting the action on the screen, but the soundtrack quickly begins repetitive and uninspired.

The main motif that runs through the score, a fast paced, staccato rhythm, opens the album in "National Treasure Suite" and is passed between piano, guitar and strings. One interesting thing about this score is that Rabin used a large orchestra to record it, and yet somehow still manages to make much of the music sound synthetic due to the heavy use of additional synthesized percussion and sound effects and electric guitars. The theme for National Treasure appears in the second track, "Ben", and is a standard Rabin patriotic theme performed primarily by the brass. This theme also returns in "Declaration of Independence". Some of the string orchestrations beneath the bold brass performances are reminiscent of some of Rabin's best work in Armageddon.

Three cues on the album are purely action - "The Chase", "Foot Chase", and "Interrogation" - and do not contain either the theme or motif mentioned above. "Spectacle Discovery" brings back the quick-paced motif and the album closes with a poignant return to the main theme in "Treasure". While National Treasure yields no surprises for fans familiar with Rabin's previous work, it is a very enjoyable score and it is good to hear Rabin return to blockbuster films. Maintaining the patriotic feel he created for American Outlaws and Armageddon, National Treasure is consistent with Rabin's previous work. However, as to its function in the film, both Rabin and Bruckheimer know well what they are doing and ended up with a huge success in the late summer box office.