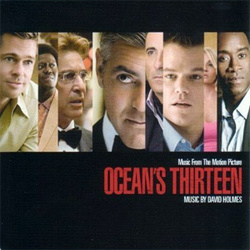 With the final installment, fans of the rat-pack redux trilogy get exactly what they have been asking for: more of the first film. Ocean's Thirteen goes through great efforts to distance itself from the much maligned second film (which I still love) and recreate the old school Vegas Magic. They even seal the deal with Ol' Blue Eyes crooning a tune ("Out Town"). Composer David Holmes already delivered the goods in both previous movies and now he's brought everything he's learned to the table and puts out in his words "The best of 11 & 12 all in together."

The album is a layer cake of Holmes' previous successes. Ocean's Eleven established his trademark blend of jazz, lounge, funk and break-beat, but he relied heavily on his previous electronica work pulling key tracks from his old albums ("Rodney Yates", "Gritty Shaker", "69 Police"). Tracks like "Grand Opening" and "Diamond Location" recapture that flavor again. In Ocean's Eleven, Holmes also relied on an old pop hit (Elvis' "A Little Less Conversation") for the theme song. He uses the same technique once more, briefly working Sinatra's "Our Town" in "Earthquake." There's also a call back to the first film in the source music. Included is an early 80's Moog cover of "Clair de Lune" by Isao Tomita and a Puccio Roelens' cover of "Caravan". The final track ("Soul Town" by The Motherhood) is the embodiment of the vibe: breezy, classy and cool.

In Ocean's Twelve, Holmes left his comfort zone and started experimenting in broader styles, combining psychedelic acid-rock instrumentation, Italian film music and... well, anything that sounds sweet. The album opener ("Not Their Fight") starts with this unmistakable fusion and from track to track, he'll keep changing the arrangement to keep you off guard. A random cue like "Zippo's" may come out sounding like African Jazz or "The Nose" may recall 60's and 70's caper movie music, with warbling woodwinds and a flute driving the melody. The beauty of these esoteric elements is that the music still doesn't come as self-conscious.

Is there anything new? In terms of style? No, but there is refinement. When you listen to closing cues like "Snake Eyes" or "All Sewn Up", you hear the various aspects of his evolution side by side. The psychedelic elements sit comfortably with the brassy big band elements. Holmes is in full control here and he's now the master of the jazz/funk/electronica fusion with only Yoko Kanno (Cowboy Bebop) close behind. I think the man is clearly deserving of his own adjective. Holmes-esque or Holmes-ish. Clearly I'm not the English major here.

This album never innovates like the first two albums, but it never falters. The iTunes store release includes a bonus track of Holmes music ("Five Diamond Man," a low-key percussion and bass cue) and a Mint Royale remix of "This Town". The only thing that could goose this up more would be the trailer track "Theme from Andrex" by Shawn Lee. It is simply smooth plateau of awesomeness.