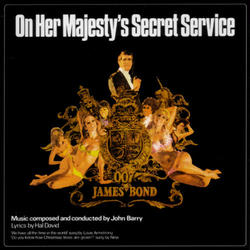 On Her Majesty's Secret Service - Expanded

There are two ways to approach reviews for CD's. One is to introduce a score to listeners who have never heard the particular work in question, or even anything by that composer, and the other is to reacquaint the reader with a much loved score that they enjoy reading about.

I can't believe there is anyone reading this that is not familiar with John Barry's On Her Majesty's Secret Service, to my mind an epochal Bond score, and perhaps a cornerstone in Silver Age soundtracks.

When you get those infuriating lists of "The 100 best soundtracks – EVER", there is normally a Barry Bond in there, and it is usually Goldfinger. Whilst I have no arguments about this scores importance, originality, and influence, in my opinion On Her Majesty's Secret Service is a superior work.

John Barry's creative maturity during the 60's was as swift as it was substantial. His versatility and inventiveness was well to the fore. The Bonds allowed him his self-confessed exuberant "Mickey-Mouseing" style of scoring, whilst his work with Bryan Forbes for instance allowed him to explore a more internalised, restrained style of scoring.

It's hard to believe that the arranger of Adam Faith's string of Top Ten hits of 1962 was just six years later winning an Oscar for his majestic, epic work on The Lion in Winter.

Similarly his development through the Bond scores was equally spectacular, and it's possible that he reached his zenith with this, his 5th score to the 6th entry in the series. The original LP and subsequent first CD release have been long cherished items, and represented a reasonable amount of the score as heard in the film. There was always the most notable omission of the Gumbold safe break scene, but as it turns out with the arrival of this (more or less) complete version, there was not only more music, but more completely new themes that make this the most fully satisfying entry in the series.

Barry scores through the scenes more than his previous 007 scores, and given that the Bond/Tracy romance is at the core of the film, the score has a more elegiac tone, there's less of an over-reliance on brass and bombast, and more of a concentration on strings and melancholy. Not that the score is ever boring, the romantic cues are amongst the most ravishing he composed for the series. The alpine setting has given Barry the inspiration for some truly majestic music. In fact, the score covers all the bases – action, suspense, romance, scene setting, melancholy, source cues, the music for On Her Majesty's Secret Service ticks all the boxes in grand style.

The theme for On Her Majesty's Secret Service was ground breaking for many reasons. It was the first theme since Dr.No that had no song. Although Leslie Bricusse is reputedly to have written a lyric, this is a pulsing instrumental theme, driven for the first time in a Bond film with synths. I must confess I much prefer the version Barry arranged a couple of years later for "The Persuaders!" LP. That version is much more muscular, and the synth is in a lower register, and much more punchy. However, the theme as it appears in the film and on this CD suits the credits, and in any arrangement, the melody is an absolute masterpiece in prowling, unstoppable, menace. In my opinion, a lyric would have detracted from the dignity of the melody.

There is of course a song (two in fact), and it appears later in the film to accompany a romantic montage (another Bond first!) between James and Tracy. "We Have All the Time in the World" is a beautiful song with lyrics by Don Black sung with bittersweet irony by the dying Louis Armstrong. He gives the song much weight as his voice is a link back through four decades and lends credence to the lyrics concerning life unfolding, the cares of the world far behind. Apparently he was so unwell, the song had to be painstakingly recorded one or two sentences at a time, and then edited together. It is to Barry's, Armstrong's, and producer Phil Ramones credit that the finished article is a seamless and languid classic.

Already, with these two tracks alone we have a Bond score worlds away from even the previous entry, 1967's You Only Live Twice. My theory is that what we have here is a beautiful confluence of events. By 1969, John Barry had matured into a world class and confident composer. The late sixties was an incredibly fertile period in film music history. On Her Majesty's Secret Service was the best Bond story written, offering incredible creative scope. That the producers chose to make this film, with this composer, in this year is something we should all be grateful for. Imagine if we'd had, say, Marvin Hamlish scoring On Her Majesty's Secret Service in 1978? Not good.

The score has so many riches, but I'm going to concentrate on the extras. The simple mounting suspense of "Gumbold's Safe" is hard to underestimate. Not dissimilar to "The Laser Beam" from Goldfinger, a simple 8/5 Morse code-like phrase, repeated and built up to a tense climax doesn't exactly sound like a classic cue, but the fact that I, and I know many, many Bond fans have been hankering after this track since 1969 is testament to the tracks simple brilliance. It's all it in the delivery. The melodic line of the Morse-code phrase is as irresistible as it is instantly memorable. Also, it borrows nothing from the motifs of the rest of the score and stands on its own as a terrific piece of suspense music.

Another stand out on the expanded release is "Bond Meets the Girls", a dreamy, swooning track for strings and woodwinds that contains a Barry trademark – heartbreaking chord changes in the string work that simply make you sigh with contentment. The track segues into a moderate tempo suspense passage utilising strings, synths , xylophones and woodwinds.

"Dusk at Piz Gloria" effortlessly describes just what it says on the tin, evoking sunset in the Alps with a charming melody picked out on piano and pizzicato strings before devolving into a sequence of swooning string chords. A beautiful track.

Then we move into historically interesting territory for Barry fans. "Sir Hillary's Night Out", where Bond sneaks around the Piz Gloria compound and beds Ruby, contains snatches that fans will recognise as the track "Who Will Buy My Yesterdays" featured on 1970's "Ready When You Are JB". Rumour has it that another track from that LP, "The More Things Change" also originally appeared in On Her Majesty's Secret Service, but was dropped in the editing process. The sheer number of memorable melodies written for this one film is staggering.

A word or two here about "Do You Know How Christmas Trees Are Grown", sung in the US and English speaking territories by Nina. As it stands, especially with the (sometimes out of tune) children's chorus it's fairly hideous, and out of place on the soundtrack, if not the film. However, try (and it's a big effort) to divorce the lyric and choir from the backing. In the background is a beautiful arrangement. I would love to hear an instrumental using the same arrangement. This score is business as usual for Barry, it's a shame the choir more or less kill it, especially when they go for a sustain...arrgh.

When listening to this expanded release, don't skip the original tracks in favour of the unreleased material ,as the original cuts have in many cases been expanded and re-edited to their original glory too. "Journey to Blofeld's Hideaway" is one such track. A majestic, regal opening for brass segues into shimmering strings as Bond travels by helicopter to Piz Gloria. The Alps are musically evoked like never before. The music here has a noble, stately feel to it, and would not appear out of place in The Lion in Winter. In its expanded form it's almost completely unrecognizable from the original release form, which interpolated the fight scene on the beach in the films opening, which itself is now reinstated into "This Never Happened To the Other Fella".

"Over and Out" is expanded just long enough so we can hear its valedictory flourish, rather than the ignominious fade out we were used to in the past.

I really cannot praise this score highly enough. It's a must not just for Bond or Barry fans, but for anyone with even a passing interest in film music. Sound quality, packaging and artwork are all top notch.