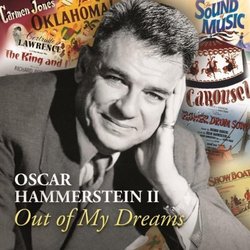 Oscar Hammerstein II - Out Of My Dreams

OSCAR HAMMERSTEIN II - OUT OF MY DREAMS features musical numbers from five of the timeless, ever popular Rodgers & Hammerstein films and songs and scenes from two versions of Show Boat, the groundbreaking musical written with composer Jerome Kern. Irene Dunne, Paul Robeson and Helen Morgan star in the 1936 film and Kathryn Grayson and Howard Keel are the stars of the 1951 remake. Also included, from the rarely seen 1941 film, Lady Be Good, Ann Sothern sings "The Last Time I Saw Paris," a song written by Oscar Hammerstein II and Jerome Kern, which won the Academy Award as Best Song and "Dat's Love" from Carmen Jones.