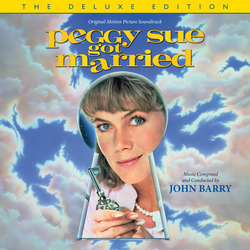 John Barry at his most magical. A classic Barry score treated to a massive expansion and all shined up with a new mix so it sounds better than ever! It's John Barry's music that transports us back in time in this film. His score is achingly beautiful and so touching. It captures all of Peggy Sue's love for her family and longing for home. New CD also features all of the period songs from our original release. A MAJOR Varčse Sarabande CD CLUB release!