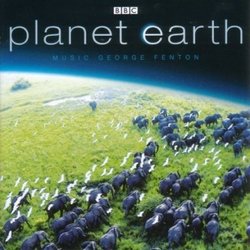 Oscar nominated composer George Fenton won his second well-deserved Emmy (after Blue Planet in 2001) for Planet Earth in 2006. The 11-part High Definition documentary series was a huge success for the BBC and Discovery Channel, and a large and diverse project for Fenton. Because of the series\' breadth of footage from all over the Earth, Fenton\'s music is highly varied as well. He wrote a number of themes and motifs that are simple and elegant with the purpose of having the ability to be used in a variety of ways, allowing for use in many contexts and orchestrations. This makes for a very interesting listen, as much of the score is subtle. The 130 minute, 2-disc album is still only a sampling of cues from each episode, but generally contains most of the cues fans will want.

The main theme is introduced in the "Prelude" in the brass. It\'s most prominent statement is in "Snow Geese" in the solo trumpet. It is a gently rising theme, but also used in a descending pattern, as in "Iguacu". It can also be heard in a string solo in "Snow Leopard", on the flute in "Tibet (reprise)", and inversed in "Surfing Dolphins" on the clarinet. The latter is a good example of the ways in which Fenton manipulates his themes to fit the highly varied styles and landscapes of the different episodes. All of the themes are generally rising patterns of notes with an upbeat, majestic, or triumphant tone. Fenton\'s orchestrations are similar, with a heavy emphasis on brass, but relies on woodwind and string solos as well. He uses vocals sparingly, with some female soloists, as in "Tibet (reprise)". Human voices are used the most in cues from the Caves episode, which was the only one to feature humans in the film.

The secondary theme is used both as a main theme and as a countermelody. This theme is best heard in "Earth\'s Highest Challenge" with a rising string line and horn countermelody in the opening of the track and a reprise in the last minute. This cue was also used in the Deserts episode. This rising theme is also heard at the end of the Prelude and behind the vocals in "Namibia - the Lion and the Oryx". It is used as a countermelody on the horn in "Journey of the Sun" and "Plains High and Low" and as chords in "The Karakoram" and at the end of "Desert Winds - The Locusts". While this is just a few examples, there is also a variation on the theme in "Discovering Antarctica" on the horns as well.

There are other motifs and variations on these themes that weave in and out of the score. The music from each episode may not sound similar, but all are connected by the use of these themes and melodic patterns, though subtle and varied. Fenton also does a good job highlighting the events on the screen, often timing the notes to animal actions, such as the lizards catching flies in the desert in "Fly Catchers". In "Angel Falls", the music generally consists of ascending note patterns as the camera nears the waterfall. Then the theme arrives in a descending pattern as the camera flies over the falls, representing the fall of water and the second half of the cue continues to be descending patterns. This descending theme returns again in this episode in the trumpet in "Iguacu". Between these is another standout cue, "River Predation" with marimba and pulsing strings under a woodwind motif, then moving into a bolder cue with percussion and brass. I cannot not list every instance of the themes here, but merely show a few of the highlights. Fenton\'s Planet Earth score is a step beyond his acclaimed music for Blue Planet, and the 2-disc soundtrack is a wonderful compilation of his effort.