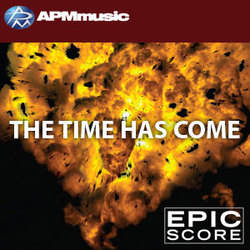 The Time Has Come

Review: Time Has Come, The

The variety of music libraries for use in film and television advertising has exploded in recent years. X-Ray Dog, Immediate Music, Brand X, The Pfeifer Broz., APM Music and others are just a few libraries that have had their music cues used in marketing.  Identifying these non-film score pieces of music has become increasingly difficult and frustrating for fans as the music is designed to affect our emotions, and yet we cannot often get our hands on the music itself. The situation is changing again, however, with the expanding iTunes music store, which allows for releases too short to bother pressing onto a CD. Recently, APM Music released the hugely popular trailer music track from the "Epic Music" library that was used to market the BBC\'s groundbreaking documentary series "Planet Earth", to iTunes as a "single" release. Composed by Gabriel Shadid and Tobias Marberger, "The Time Has Come" has all the elements of good trailer music, and allowed the Discovery Channel to hype "Planet Earth" to a highly successful level (not that the incredible high-def footage wouldn\'t have made the show a hit anyway).

So what did "The Time Has Come" do for "Planet Earth"? The track begins with a slow backbeat by a timpani beneath a haunting female vocalist. The gently rising and falling melody in the vocals create an otherworldly tone for the first clips from the mini-series, like shots of Earth from space. This was the intention of BBC, to depict the Earth as few people have seen it. The music picks up the pace quickly with a moving low string line as more rapid and more spectacular images are thrown into the trailer. When the chorus and brass kick in, we get the truly amazing shots, like a great white shark jumping out of the water and a crocodile attacking a wildebeest. The moving string line keeps the pace up, following a similar rising and falling pattern to the vocals. One perfectly times moment is when the horn comes in just before the chorus in a crescendo that follows the close-up of the hidden crocodile opening its eye. The track on iTunes is longer than that used in the "Planet Earth" trailer, and includes more of the vocals as well as a faster version of the climax cue at the end. Anyone who even noticed the music in these well-played television spots should go find it on iTunes. The downside to single cues from a production library is that there is, sadly, only this one cue. So get it while you can.