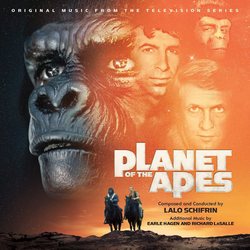 Planet of the Apes

La-La Land Records and 20th Century Fox present the remastered and expanded 2-CD SET of the original score from the 1974 television series Planet of the Apes, based on the famed sci-fi feature franchise.

Renowned composer Lalo Schifrin, along with Earle Hagen and Richard LaSalle, bring the primal action and drama of the Apes saga to orchestral life, resulting in a vivid companion piece to the groundbreaking scores from the original feature film series.

Produced by Nick Redman and Mike Matessino and mastered by Daniel Hersch, this amazing 2 CD SET is limited to 2000 Units and features more than 2 hours of exciting music. Exclusive, in-depth liner notes from writer Jeff Bond takes you behind the scenes of the show and its scores, while Jim Titus' striking art design will drive Apes fans bananas with delight!