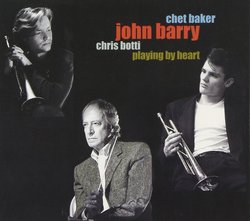 by David A. Koran December 15, 1999
4.5 / 5 Stars
This December ushers in a well-overlooked romantic comedy of early 1999, Playing By Heart. I remember seeing trailers for this star-studded film and thinking that, at least by the choice clips, it would be an enjoyable date film. The film itself has four major relationships (creatively tied together) that run the gambit from uneasily perfect to perfectly disastrous. The only fault being the ending wrapping itself in a totally predicable cheesy ending, but doesn’t detract as much as one would think.

Along with the obligatory 90’s "songtrack" we get an exceptionally different score from a master of the film scoring art, John Barry. Harking back to many of Barry’s earlier career scores, this score is more of a concept album rather than an actual score album. Heavily inspired by trumpet maestro, Chet Baker, this score’s jazz is also intimately tied into a quote that Angela Jolie says to open the film (a quote originally attributed to composer Clara Schumann). This quote pops up in the middle of the film again and sums itself up at the end of the film (you have to see the movie for it to really make sense). Trumpeter Chris Botti fills in (rather nicely) for the former Chet Baker in parts that Barry originally scored for the film, as well as the appearance of three original Baker pieces on this album.

The music here, is a perfect underscore for a film, a rare feat for using contemporary styles of music without sounding like impersonation. The film itself is enjoyable, and only if to see Sean Connery wiggle and bark comically like a dog. The music helps run the gambit from extremely sad to remorsefully happy (especially the resolution of the Madeline Stowe and Dennis Quaid relationship). Decca does a wonderful job in it’s presentation, even going as far as to get noted film music author, Jon Bulingame to contribute to the liner notes. John Barry does more justice to this film than he has in the past year with his other projects, but most folks wouldn’t have heard it due to the mediocre performance of the film in theaters. Luckily it’s made its way to video and is a perfect date movie, or just one to watch for the great interplay between the ensemble of acting talent assembled for the film.