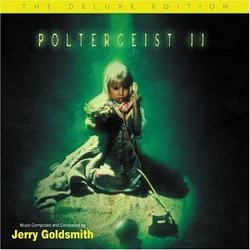 Jerry Goldsmith has always been an innovator in film music, finding the right balance between orchestrated and synthesized music. The first real synthesizer scores for him were in the mid-70's, roughly starting with Logan's Run. In his original Star Trek: The Motion Picture score, he uses pipes and high-tension cables with slight synthesized ornamentation to produce in my opinion one of his best scores. Unlike, say Wendy Carlos who would solely rely on a synthesizer, Goldsmith always saw it as simply another instrument to provide more color to a piece. Most of Goldsmith's career has seemed to be a search for even more "different" sounds.

The original Poltergeist is without a doubt one of Goldsmith's best works and deserving of the classic status it possesses (both for the movie and the music). There's a sense of the unnecessary in making a sequel, but that doesn't hamper Goldsmith's effort on the score to Poltergeist 2: The Other Side. Though the results on this film aren't up to the first film, there's a lot of important experimenting that would affect Goldsmith's work from this point on.

This album is in the mid-80's transition period of Gremlins (1984), Rambo, Explorers and the original score to Legend (all 1985) where the electronic elements came comfortably into the forefront, blending effortlessly with the full orchestra. This approach would develop into the work he would produce consistently on Total Recall, Medicine Man, the Joe Dante movies, Goldsmith's subsequent Star Trek work and dozens of other scores.

For the sequel, Goldsmith adds into the mix three new themes: one for the Indian shaman, Taylor, one for the family's psychic abilities, and the Beast / Henry Kane theme. All of them have synthesizer elements while there returning themes: the Cuesta Verde theme and the Carol Anne theme are mostly orchestral.

The Beast / Henry Kane theme contains a throbbing synthesized thermin sound that wails like an ailing church organ. I wish that he used the Beast theme from the original film, which was so effective and so perfect. But the music is effective as the creepy preacher associated with it (the late, great Julian Beck) only appears in three scenes, his presence is properly extended through Goldsmith's work with true restraint.

But in the action cues, Goldsmith lets the cat out of the bag. When the ghost finally attacks the Freelings ("They're Back", "Wild Braces", "The Worm"), it is an explosion of the multiple approaches, the synthesizers moan, the horns blast with the addition of quasi-Omen-esque chants. It's busy and exciting, but not threatening. And part of it is the instrumentation. It is too busy. Too distracting. And not organic.

In addition, the tone is no longer that of a horror film, but more of an action/fantasy. The climatic cue ("Reaching Out") would fit in perfectly with the score of Legend or the next year's Innerspace. This incongruity drains a lot of fear out of the story. Not that it makes it a bad listen or a bad score by any stretch of the imagination. For Goldsmith fans, this is a must buy, not as much as a single score, but as part of his larger work.