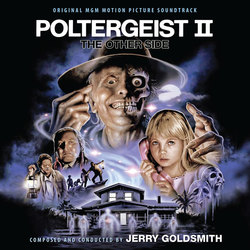 Poltergeist II: The Other Side

In 1986, MGM premiered its sequel to the hit 1982 film Poltergeist. Returning to score Poltergeist II was composer Jerry Goldsmith, who had received an Oscar nomination for the first film's score. Relying sparingly on musical ideas and themes from the first film, Goldsmith wrote a new score, focusing on the new characters and supernatural ideas presented in the film. For Intrada, the film presented a landmark—it was only its second release, following the prior year's inaugural release of the same studio's Red Dawn, but its first being tied to the premiere of a summer blockbuster (hopefully) film and its first Jerry Goldsmith album. The costs were enormous, including full payments to both the musicians' and singers' unions—costs that only made a 30-minute album possible. The composer and music engineer Bruce Botnick assembled a program focusing on certain elements of the score, while ignoring others (mainly the aggressive action and large choral pieces).

Since that time, the soundtrack to Poltergeist II has been re-released and expanded by Intrada and several other labels, with alterations and additions along the way. The score has returned home now and it hails the most definitive version yet. This three-CD set presents the complete score from the digital Sony PCM 3324 mixes Goldsmith and Botnick prepared back in 1986 for presentation on CD. While clean and quiet as you'd expect from the digital medium, the producing team added a fair amount of reverb. The complete score is presented again, this time newly remixed from the 1/2" analog film mixes stored in the MGM vaults, designed more to suit the film. While not as balanced as the digital mix, it features a much more crisp, detailed sound, mainly due to the lack of reverb.

The third disc features a wealth of alternate and unreleased material, the most impressive of which is the unreleased, complete initial version of the massive final confrontation, "Reaching Out/The Astral," which features a distinctive three-part female chorus throughout the winding chordal sequences and, at one point, a solo soprano intoning her own descant. "The Astral" was Goldsmith's own titling of the climactic sequence where Carol Anne reappears. For this early alternate confrontation music, besides the unique choral material, Goldsmith wrapped with a more detailed finale emphasizing a variety of colors before finishing with a very deliberate, accented trombone coda. It is all being premiered here both with and without chorus. Both versions were dropped in postproduction and Goldsmith's now-familiar re-scored sequence was used instead. Flipper-style booklet art plus all-new liner notes from Doug Fake chronicling entire history of this Intrada project complete this impressive Jerry Goldsmith presentation.