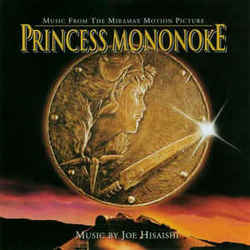 The release of Hayao Miyazaki's Princess Mononoke in the United States in 1997, dubbed in English by a cast of American actors such as Claire Danes and Minnie Driver, helped to make Japanese anime widely known in America. The film - an epic tale of the struggle between nature and the encroaching modern world - features a score by acclaimed Japanese composer Joe Hisaishi, who has formerly collaborated with Miyazaki.

Hisaishi's score is an epic orchestral masterpiece on par with scores by great American composers such as Jerry Goldsmith or James Horner. He employs multiple solo Japanese instruments such as Taiko drums, koto, and shakuhachi while maintaining the full sound of the orchestra. The instrumental fusion which he achieves creates a soundscape that perfectly reflects both the innocence and beauty of the forest and the evil encroaching on it. The main theme is beautiful and Hisaishi works it into the score in many forms, from the full orchestra in "The Journey to the West" and "The Land of the Impure" to moving performances on solo instruments as in "The Encounter". This Mononoke theme is also featured in the song "Mononoke-hime" performed in English by Sasha Lazard and an instrumental version is also included. There is a secondary theme for the character of Ashitaka first heard in "The Young Man from the East", which also closes the album with a suite entitled "The Legend of Ashitaka Theme".

What makes Hisaishi's score good in addition to his themes and orchestrations is the depth of his music. Every track on the album has a different tone. Two cues feature taiko drums, but are used for very different purposes: in "Evening at the Ironworks", the light, moving percussion line backs up the woodwinds and horn in an upbeat rendition of the theme; "The Battle Drums (Tatakai no Taiko)" is a darker, pounding cue performed by a taiko ensemble, reflecting a march to war. The vocals on the album also add to its diversity and are some of the highlights. One such song is "The Tatara Women Work Song" performed in Japanese. Another highlight is the intricate string layering in "Adagio of Life and Death" and "Adagio of Life and Death II". Both contain beautiful chord progressions and suspensions in a solo string ensemble. In contrast to the layered orchestrations is a beautiful piano solo in "Ashitaka and San" performing the Ashitaka theme at the end of the album.

Hisaishi's score is a fusion of ethnic instruments, orchestra, and vocals and represents multiple emotions in its many cues. In 1999, Milan Records released a second album containing symphonic suites from Hisashi's music performed by the Chech Philharmonic Orchestra. The score is broken up into concert suites and allows the orchestrations to be filled out without the hindrance of film editing and make for a wonderful listen for fans of the original score.