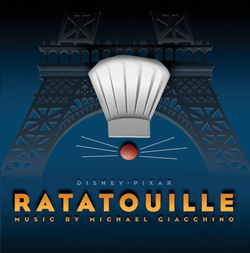 Isn\'t Ratatouille the best name for a movie you\'ve heard all year? In this day and age you would think that some corporate power somewhere would have insisted that the director or the producer change the name. After all, it\'s a French word, and Americans do not go to movies with foreign titles. It has the word "rat" right at the beginning. Who likes rats and who needs to be reminded that this movie is full of them? And how many Americans have ever had ratatouille? Or know that it\'s a stewed vegetable dish? But perhaps realizing that a movie about a French rat who just wants to cook needs this title, the marketing people did the best they could and put the movie\'s pronunciation right in the title graphic. Every time I see that little "rat ∙ a ∙ too ∙ ee" I just have to smile.

That level of cleverness extends to Michael Giacchino\'s lovely score for the movie. In what other movie will you find score cue titles like "Kiss and Vinegar," "Colette Shows Him Le Ropes," "Heist To See You," and "End Creditouilles?" This cleverness delves deeper than the titles as well, as Giacchino plays with every musical convention you can imagine. Stop for a moment and imagine the sound of Paris in movies. Do you hear La Marseillaise played by a brass-heavy orchestra? Do you hear a light waltz tempo, perhaps played on an accordion? You\'ll find both of those tropes piled on top of one another in the 40 second "Welcome to Gusteau\'s." Similarly, imagine you are watching cartoon slapstick, full of chases, pratfalls, and knives being thrown at anthropomorphic animals. You probably hear racing strings and squealing brass that quickly changes to dancing strings in their highest register. In short, you hear Carl Stalling\'s genre-setting music for "Merry Melodies." Giacchino parodies this style as well, most effectively in "100 Rat Dash," quite possibly the best such imitation I\'ve ever heard as it emulates without copying.

Giacchino is a master at meeting expectations, often while throwing in a twist of his own. Unfortunately, this remarkable ability is also, to me, the greatest shortcoming of his Pixar scores. Ratatouille marks Giacchino\'s second Pixar film after The Incredibles, a score that channeled John Barry so well that many thought Barry wrote the themes. With knowledge of those two films, I am ready to proclaim Giacchino a remarkable stylist who knows how to communicate a film\'s emotions and actions using accepted tropes, but I am unsure about placing the sobriquet "next big thing" on his shoulders. Giacchino\'s music for Alias and Lost has been consistently engaging, challenging, and unique. In those shows, he has built tension with limited means, especially in the final few seasons of Alias where he pared down his orchestra to a lean sound palette, but I have yet to hear that kind of original inventiveness from his feature work (his music for last year\'s Mission Impossible III was Alias transferred to the big screen).

In spite of that reservation, however, Ratatouille is, like The Incredibles a delightful score. It opens with "Le Festin," a torchy French salon song performed with panache by Camille that sets a smile on your face for the rest of the album. The score\'s tone ranges from the bizarre (the Cowboy-song stylings of "Remy Drives a Linguini" complete with whistling and Hawaiian guitars) to the sublime (the pathos of "Abandoning Ship" with its unexpected string chord progressions) to the humorous (yes, there are two cues about soup) and many moments in between. The main theme, a driving melody on accordion counterpointed by piano and drums, as in "Special Order" and the opening of "End Creditouilles," is infectious and you\'ll find yourself humming it for days. There is plenty to enjoy about Ratatouille, and I give it a recommendation because it is well crafted. I\'m just waiting for the day when Giacchino brings a new voice like he brought to TV to feature films. That will be something to hear.