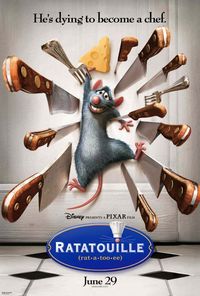 With their recent acquisition of the Pixar Animation Studios, Disney has made a very sound investment. The studio has consistently churned out quality animated products, with even their weakest entry, Cars, being in a class above so many other films. Their latest full-length feature film is Ratatouille, and it\'s set to raise the bar of computer animation even higher.

Remy (voiced by Patton Oswalt) is a discerning rat who appreciates the wonderful sensation of mixing food together. After becoming separated from his family while escaping from a shotgun-toting granny, he finds himself in Paris, France. Soon he ends up at Gusteau\'s, a 5-star restaurant that lost two stars due to a negative review by food critic Anton Ego (Peter O\'Toole) and the death of Gusteau himself. Now run by former sous-chef Skinner (Ian Holm), the restaurant is struggling and things are compounded with the arrival of gawky Linguini (Lou Romano). A chance encounter between Remy (who can cook) and Linguini (who cannot) leads to a very unlikely partnership.

The story is exceptionally solid. There are a few predictable moments, but overall - like the rest of Pixar\'s movies - it\'s straightforward and a delightful journey to partake of. The voice actors do a lovely job, fitting the characters quite nicely. As romance blooms between Linguini and fellow chef Collete (Janeane Garofalo), Remy starts to feel unappreciated, resulting in some pretty deep lessons about friendship and respect. Kudos to writer/director Brad Bird (The Incredibles) for another home run.

The animation is stellar, and the lighting gorgeous to behold. Sonically, the world of Paris (and a gourmet kitchen) are replicated so vividly that it\'s hard to imagine that everything was created from scratch. The musical score, by composer Michael Giacchino, is fun and supportive, and the end credit sequence is jazzy and refreshing.

There\'s a lot more I can say about Ratatouille, but it\'s best that you experience it yourself. This is a truly wonderful film, and easily the best of 2007 so far. Bring the kids, bring the grandparents, bring everyone you know - it\'s a must-see film.