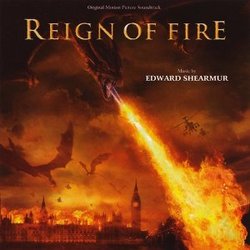 Dark, brooding, and sizzling as if the music itself were on fire, Edward Shearmur's Reign of Fire needs multiple listens before one can hear past the thundering percussion and electronics to the quite haunting music on the album. Fortunately, I heard the album after seeing the movie; it made appreciating the dark chaos of the score easier. The music fits the movie well. Set in the future in a destroyed Earth, Christian Bale plays the leader of a small band of survivors struggling to harvest food between dragon attacks in an ancient castle. Matthew McConaughey plays Van Zan, the leader of a band of dragon hunters who attack by jumping out of a helicopter, piloted by Izabella Scorupco's character. The movie is a summer action flick, and it definitely has its plot flaws, but it's worth a look for the special effects alone...and, of course, for the music.

Reign of Fire is very different from the other mainstream scores by Shearmur (Count of Monte Cristo and K-Pax). It is dark and harsh, which perfectly fits the film, but may not agree with your senses. Part of the mood of this score comes from the mixing, giving it its harsh, electronic sound. The brass give the tone a bright feel, elevating it above regular horror scores that have a darker tone. The harshness also comes from orchestrations by Robert Elhai, whose credits include Elliot Goldenthal's Final Fantasy and, more recently, Brian Tyler's Darkness Falls and The Hunted. Both of Tyler's scores have similar characteristics to Reign of Fire, especially the harsh electronics.

The album starts off with "Prologue", an ambient, percussive, and electronic piece that is reminiscent of Don Davis' score for The Matrix, interspersed with brass rips. The music crescendos through the next few tracks, adding layers of chaotic instrumentation, such as racing violins, brass flares, and low brass rumbles. By the end of "Field Attack", the first semblance of a theme begins in the brass among militaristic string playing and a steady snare beat.

The militaristic tones take over as McConaughey's character is introduced. Violins speed through "Marauders" in an action theme similar to Mancina's whirlwind score to Twister. The action slows with Van Zan's arrival in "Meet Van Zan" where Shearmur's main theme is first introduced in its most complete form. This track itself is worth the price of the cd. The sudden shift in styles will make you turn the volume up after the preceeding anarchy. The main theme is anthemic, passing the motifs along between the strings, trombones, and finally the french horns, with snares pounding away in the background. It is more than reminiscent of Hans Zimmer's "Brothers" theme from Backdraft, especially during its second appearance in the slow track "Dawn Burial". Between these is "Archangels", which is the only upbeat track on the album. It's similar to parts of Harry Gregson-Williams' Spy Game, electronically, with some harsher, louder bursts throughout.

The chaos builds with more layering in the instrumentation, especially the brass at the end of "The Ruins At Pembury" where it merges into "Inferno", tying up the chaotic section of the score. At this point in the film, the humans go from being hunted by the dragons to hunting the mother dragon. The final three tracks are just as harsh, but take a different tone. The first two of these are action scoring at its best, with some eerie percussion thrown into the mix. The final battle builds up with pounding drums that segue into a violently beautiful brass progression that leads into the final track, "Rebirth", with softly tremoring strings. The main theme is once again brought out here in the strings and then wraps up the score in the last 20 seconds with a variation on the theme in the brass that really brings out the dark beauty of Shearmur's music.

The Varese Sarabande album is well mixed and a generous length for them, at just over 50 minutes. If the score had been much longer, it would have been very difficult to listen to. The packaging is good; the front cover would catch anyone's eye with London in flames in the backdrop of a leathery dragon spewing fire across the picture. The cd does not contain the few rock songs heard in the film, particularly the Mad At Gravity track "Walk Away" from the skydiving scene. Their debut album, Resonance, features a promotion for the movie on the cover and this song as their first single.

Reign of Fire needs time and, to the casual listener, would sound like electronic noise. However, it is a powerful, anthemic score full of militaristic action and will often surprise you with some beautiful brass scoring as well. If you think you can handle the harsh electronics and pounding rhythms, it would be a good addition to your collection. Who ever said film music had to be pretty?