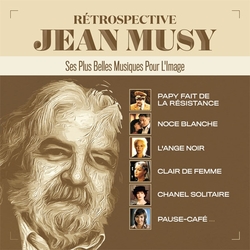 Music Box Records is pleased to present, for the first time on CD, a retrospective dedicated to French composer Jean Musy and his best works composed for the screen (Cinema and television) spanning three decades.

Jean Musy started working in the 1960s and is known primarily as arranger and accompanist for many famous French singers (Joe Dassin, Barbara, Nicole Croisille, Yves Duteil, Françoise Hardy, Mireille Mathieu, Charles Aznavour, to name a few). He is also credited on over a thousand 45 rpm records and two hundred albums. Most notable is his involvement with French composer Francis Lai, for whom he arranged numerous soundtracks in the late 1970's (Bilitis, International Velvet).

This retrospective brings to light less well-considered or well-known films. This present album also highlights his close collaboration with some French directors (one-time collaboration such as Clair de femme, directed by Costa-Gavras and long-time collaborator director Jean-Claude Brisseau such as L'Ange noir) and some very popular films (the cult film Papy fait de la résistance aka Gramps Is in the Resistance) and TV series (Pause-café). Jean Musy undoubtedly knows how to adapt to very different artistic universes while still retaining his own unique touch.

The CD comes with a 12-page booklet with liner notes by Nicolas Magenham, based on a new interview with Jean Musy.