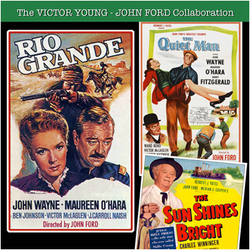 Our program gathers three original soundtracks by the phenomenal Victor Young written for John Ford's movies of the early fifties. Two of them are remastered versions while the third one, The Sun Shines Bright, appears for the first time on CD.

While an earlier DCM release devoted to Young offered exotic scores (DCM 139 For Whom the Bell Tolls / Golden Earrings / Omar Khayyam), this one has an unmistakable American flavor. Hence, traditional repertoire and popular songs of the era figure prominently in Rio Grande, The Sun Shines Bright and The Quiet Man. In some cases the director himself asked Victor Young to integrate some of these melodies into his orchestral scores.

In addition to the folk tunes, one can find in the overall program Young's tendency towards sweet and catchy melodies, but he also provides the expected bold orchestral rises for the action and suspense scenes. Firmly rooted in the aesthetic of the period, this duality is the core of Victor Young's style, which has long remained a model for composers of the big screen.

Most pieces still generate excitement for today's film music buffs, even without the support of the images. Not only did Young shine as a composer and arranger but he also proved to be an outstanding conductor. This may explain why so few of his scores have been re-recorded by contemporary symphonic orchestras that specialize in the cinematic field. 12-page full color booklet.