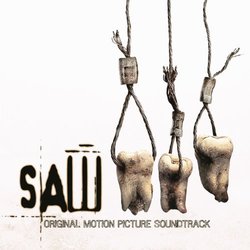 The soundtrack releases to the Saw trilogy (thus far) have been a bit hard to categorize. The first release was decent for a "various artists compilation" in that it contained a number of score cues by former Nine-Inch-Nails member Charlie Clouser. Included in these was the dramatic statement of his main theme for the Jigsaw character and contraptions that has come to creep out a lot of fans. I, personally, love the theme. Saw II saw a rock/metal album with only a single score cue, so Clouser\'s continuation of the theme\'s use on album was difficult. However, with Saw III, a German release contains two discs: one containing the typical death metal songs which was released here in the USA, and the second "bonus disc" featuring 70 minutes of Clouser\'s score, which is a first for the franchise. This album is available on amazon.de while a different release, containing only one score cue at the end of the rock album, can be found at amazon.co.uk.

The songs are generally pointless. Some high profile films get artists to record new music, but most of these songs are not exclusive to this compilation. Some good choices for the sound of the album are more mainstream and include two good songs by Avenged Sevenfold and Disturbed. Others are ones to be skipped. Some of the track names are appropriate for the idea of the film ("Drilled a Wire Through My Cheek" and "Organ Grinder") but the generally have no purpose on the soundtrack, at least in relation to the film. One song, Hydrovibe\'s "Killer Inside", features Shawnee Smith, who plays the disturbed Amanda in the films. I do have to admit that the album opens well with All That Remains\' "This Calling", which is a good fusion of metal anger with a melodic chorus and heavy guitar solos.

Clouser\'s score is, first and foremost, a horror score. A lot of it is atmospheric and dark, because that\'s what the film requires. Translating to a score album, this can be a bit jarring. The first Saw soundtrack was good because it provided fans with the highlights from the film, whereas listening to what is probably the complete score to Saw III tends to drag. However, rather than saving the main theme until the end like in Saw, Clouser uses his theme as a rhythmic and melodic tool at the same time. For this reason, the theme can be found in nearly a dozen cues. The first track to feature the theme is, appropriately, "Amanda". It is a very subtle electronic bell sound that reflects her somewhat quiet character. "Pig Juicer" (which corresponds to one of the most disgusting scenes I\'ve ever seen) has a variation of the theme on piano that sets a fast pace for the music. This returns in "Prep" in a slower, montage-like cue when they are preparing for Jigsaw\'s brain surgery.

"Final Test" ends the album with a return to the theme statement from Saw, complete with strings and electronics backing it. Clouser is the perfect choice for these films because he brings a harsh metallic edge to the music that reflects Jigsaw\'s contraptions and gruesome tests ("Footcuffed" and "In Chains" are good examples). Fans of the past albums will like this one and those of you who may have wished for more score should look into tracking down the German release - but the rest of us will probably have to pass.