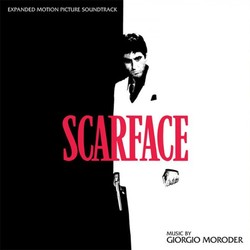 When legendary director Brian De Palma needed the perfect musicscape for his game-changing gangster opus, he called upon renowned composer and electronic and pop music pioneer Giorgio Moroder to deliver ¢ and did Moroder ever deliverģ with an absolutely iconic synth film score and a treasure trove of infectious accompanying pop/rock/dance songs.

Produced by Neil S. Bulk and Dan Goldwasser, and mastered in high-resolution by Chris Malone, this expanded re-issue of the Scarface soundtrack unleashes Moroder's classic film score on Disc One, while Disc Two features the original mix of the 1983 Soundtrack Album, showcasing the film's songs by Deborah Harry, Elizabeth Daily, Paul Engemann, Amy Holland and more, as well as Bonus Tracks that include source music, the extended versions of "Rush, Rush" and "Scarface (Push It To The Limit)," and the song "Success."