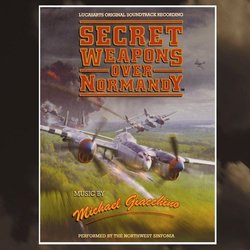 Michael Giacchino\'s World War II video game score is very similar in tone to his previous work on the Medal of Honor series. Both use large orchestra\'s for an impressive bold, brassy militaristic feel. Both also wove their main thematic material into the entire score instead of just the opening credits, a common problem with video game music. Giacchino\'s style for Secret Weapons Over Normandy is more frenetic, especially in the brass parts, which is similar to his approach to Call of Duty, but with much more depth and thematic material here. With Secret Weapons Over Normandy, Giacchino takes game scores to an even new height with the level of musicianship achieved by the Northwest Sinfonia; it is the Cutthroat Island of military game scores that leaves the listener breathless at the end. It is nonstop adrenaline and one feels weary after listening to it. I\'ve performed in musical groups long enough to feel both sorry and admiration for the performers!

What is most intriguing about Secret Weapons Over Normandy is how Giacchino is able to write in a tone and style that at times sounds like music that would have been heard in the 1940\'s, which is when the game takes place; it is along the same lines as the music played in Pearl Harbor during the brief "news" reels between scenes. At other times, Giacchino\'s standard sound is very much like John Williams and Jerry Goldsmith\'s military scores from the 1960\'s and 1970\'s. I honestly cannot recall the last time I heard such stunning and constant brass orchestrations for the military genre.

Similar to Christopher Lennertz\' Medal of Honor: Rising Sun, Secret Weapons Over Normandy utilizes a variety of cultural orchestrations to score varied geographical locations in the game. But to a greater extent than Rising Sun, Giacchino keeps the overall feel of the score the same and gives it the thematic cohesiveness of a film score. The general brass-filled orchestrations are consistent throughout the global tour of World War II; from the chorus of Russia to the Taiko of Japan, Giacchino keeps the thematic material and sound together, giving the album a much more flowing feel than most commonly disjointed game scores.

Two standout instrumentation techniques are the Taiko and the choral performances. In the Pacific front cues, a Taiko Drum Ensemble led by Stan Shikuma plays underneath the orchestrations in "The Siamese Coast", "The Rescue of Pauline" and "Midway". The use Taiko drums has been increasing in film music over the past few years. Here, as in Rising Sun, they are used as a sound effect behind the orchestra, unlike Zimmer\'s Last Samurai, which utilized the heavy percussion as a main staple of his score, which is normally the intent of the instrument. The tracks "East Prussian Factory Run" and "Fjords of Norway" feature some very enjoyable chorus cues and are easily some of the highlights of the score.

La-La Land\'s presentation of the score on album is both unique and a little strange. Firstly, it is a double disc, which is fairly unheard of for soundtracks with the exception of The Matrix Reloaded. The first disc contains a full length soundtrack to the game. The second disc has about fourteen minutes-worth of short "extra" cues from the game plus various bonus features that can be played on the computer. The extra cues run between ten seconds to just under two minutes and are extra music for scenes already presented on the soundtrack ("The Siamese Coast" and "The Siamese Coast extra"). The second disc itself is a strange listen alone, with such short cues. If you have the room on your hard drive, it makes a much better listen to put all the tracks from both discs into one playlist and organize them with the extra tracks following the first of the same title. Then the extra music actually fills out the soundtrack quite nicely.

Overall, Secret Weapons Over Normandy is quite an impressive listening experience. From this game to Call of Duty and the Medal of Honor series, Giacchino has made quite a name for himself scoring in the military genre, and has in fact redefined it in many ways. He has moved on to bigger and better projects ("Lost", The Incredibles, and the forthcoming Mission: Impossible 3), but he clearly established a strong foothold in game scoring before taking that step into film.