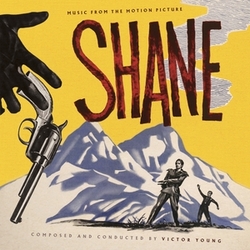 In conjunction with Paramount's centennial celebration, La-La Land and Paramount Pictures honor Young's iconic Shane score by presenting the surviving music cues from the 35mm monaural magnetic film in the studio's vaults, supplemented by a few choice cues from the film's music-and-effects track. Produced by Neil S. Bulk and Chris Malone, supervised by Lukas Kendall, and remastered by Doug Schwartz, this complex restoration of one of Young's masterworks is a must-have for all film music enthusiasts. Exclusive, in-depth liners from writer Jim Lochner take the listener behind the landmark film and its legendary score.

This is a limited edition of 2000 units.