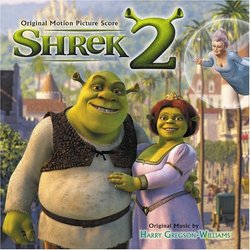 While his score was given less time in this sequel to make room for more pop songs, Harry Gregson-Williams' return to the world of green ogres - without John Powell this time around - improves upon and tightens the sound and themes from the first score. In Shrek 2, Gregson-Williams was able to develop his own sound as the only composer on the project. The result is an album that maintains the playful elements of Shrek while sounding more like some of Gregson-Williams' other solo work, such as The Borrowers. What is missing from the music, however, are Powell's adrenaline-rush electronic cues, such as the beloved "Escape from the Dragon".

In Chicken Run and Shrek, Powell and Gregson-Williams spoofed numerous other film scores, and the same is true for the sequel score. Gregson-Williams has his own themes and they are performed with the full orchestra with plenty of magic and emotion, but he also gives them some other fun treatments. "Family Dinner" showcases a very mature classical feel while "The Ball" and "Tonight on 'Knights'" take a more upbeat big band (award ceremony style) and rock style, respectively. One of the most enjoyable cues is "Far Far Away", which takes the brass and choir in a Medieval fanfare direction that builds up only to die off as if stopped in mid-rehearsal, like from "Tournament Speech" in Shrek.

All of the major themes from Shrek return, though not as often for some, such as the Dragon theme, which only appears briefly in "Muffin Man" and "Dragon!". Fiona's theme is used often and to great effect, especially in "Fiona's Room", "Not Meant To Be", and "The Prince of Her Dreams". The music contains the same magic from the first film, if not more. One particularly good track is "Deep Fried", which uses the choir and chimes in an Elfman-like cue. Other cues take on a darker feel, such as "The Poison Apple" featuring the dark sound of a bass clarinet. Gregson-Williams uses solo French horns in some of the slower parts ("By the Ol' Oak", "All Is Revealed"). Even vocalist Lisbeth Scott also returns. However, while the music supports the magic, romance, and comedy of Shrek 2, it is less varied than Shrek due to Powell's acoustic and electronic cues being absent this time around. Nevertheless, it is a great showcase of Gregson-Williams' rising talent and the range he has.