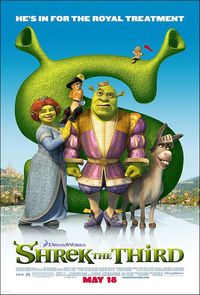 In Shrek, the green ogre (Mike Meyers) finds his true love in Princess Fiona (Cameron Diaz) and friendship in Donkey (Eddie Murphy). Shrek 2 pitted the new couple against the scheming Prince Charming (Rupert Everett) and his Fairy Godmother (Jennifer Saunders), who try to ruin Shrek\'s relationship with Fiona. We were also introduced to a new sidekick, Puss in Boots (Antonio Banderas). Now in Shrek the Third, Charming is out for revenge, and along with a whole group of fairy tale villains, tries to get the \"happily ever after\" that he feels he deserves. Meanwhile, Shrek - who doesn\'t want to be King of Far Far Away - goes off on a quest to bring back Fiona\'s distant cousin Artie (Justin Timberlake), who as a whiny teenager loser is hardly befitting of royalty. Finally, we also find out that Fiona is pregnant, and that causes Shrek much emotional angst.

The problem with Shrek the Third is that it doesn\'t seem to have much of a story beyond what I just described. Sure we have funny moments - and there are plenty that will induce laughter - but it just didn\'t feel like it held up to anything of note. Also, much of the biting wit and humor of the first two films has been dulled down, and there aren\'t any truly biting moments, which the first two films had. Add the fact that the big climax turns out to be a \"can\'t we all just get along\" type of speech, instead of an exciting energy-filled sequence, and it seems to fizzle out.

Monty Python veterans Eric Idle (\"Merlin\") and John Cleese (\"King Harold\") feel wasted, with Idle playing a bumbling wizard, and Cleese merely showing up to have a prologued death scene. Even Murphy and Banderas feel like they\'re spinning their wheels, but not getting anywhere. The animation is very good, and the rendering techniques give the film a gorgeous look and feel. The music by Harry Gregson-Williams appropriately continues the style set from the first two films, although there weren\'t any sequences that stood out as must-have album tracks.

I will repeat, I did laugh while watching the film. It\'s not a boring film, and you can certainly do worse. But where the first Shrek film feels horribly dated when you try to watch it now, this third entry in the franchise feels like a lukewarm effort, done just for the box office take, instead of having a truly good and solid story to tell.