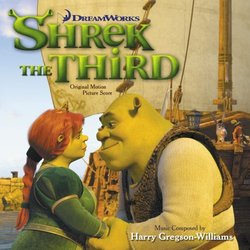 Somewhat surprisingly, Harry Gregson-Williams\' score for Dreamworks\' Shrek the Third is a step up from his work for the first sequel. Since he had composed the first score with collaborator John Powell, his solo work on Shrek 2 sounded a bit like parts were missing. While he used a few of Powell\'s themes, such as for the dragon, the solo cello and acoustic elements that Powell brought to Shrek were missing. For Shrek the Third, Gregson-Williams brought some of those ideas back, varied many of his own, and in general, composed a more interesting score, closer to the energy and creativity of the original Shrek.

The album opens with a bouncy, classical-sounding statement of the main theme. This trend continues through "The Frog King Dies", in a more somber tone. However, the album really starts to pick up with the next cue, "Another Adventure", which starts with a fun brass cue. Gregson-Williams\' variations on his own themes are very interesting here and to a greater extent than in the last sequel. "Another Adventure" is also notable because it sees the return of John Powell\'s cues from Shrek in the form of the solo cello from "Starry Night". This theme also returns in "The Campfire". This is an important inclusion in the score, as it fleshes out the "Shrek" soundscape. "Worchestershiree?" continues this acoustic sound, but with Gregson-Williams large horn sound overlapped. This cue also introduces the Artie theme.

The Arthur theme is played in full in "Artie\'s Sob Story". It is an ascending melody in the style of Gregson-Williams\' Narnia theme. Variations in brass and oboe are heard in "A Warm & Fuzzy Naval" and "The Campfire". The theme for Arthur comes into its own in "King Arthur" on acoustic guitar and later with the full orchestra. A prominent theme from the first film makes two brief appearances, this for the dragon. It is heard at the end of "The Hook Attack" and then in a more recognizable form in "(Almost) Alone At Last". It doesn\'t come close to the fun "Escape from the Dragon cue from Shrek, but it\'s nice to hear.

A Gregson-Williams animated score would not be complete without some fun music thrown into the mix. First we have a bit of "Pomp and Circumstance" at the end of "Fatherly Dreams". My favorite comes in "Princess Resistance" in the form of a nod to Hotei Tomoyasu\'s "Battle Without Honor or Humanity" (used in the trailers for Kill Bill) - heavy guitars with the Shrek theme plinked out in the background by chimes. This may even beat the "Fiona Kicks Ass" cue. The electric guitar piece is followed by a great brass action cue. More electronics are used in "Merlin" but are a weird electronic tone for the wizard. A new sound for the Shrek world arrives in "The Show Begins", but unfortunately sounds a bit close to Pirates of the Caribbean. It is a great action cue that uses a melody that seems to only appear this once, but had me listening to all three Shrek scores to find the theme. This motif, along with a number of the cues associated with Far Far Away, have a very traditional medieval feel, provided by the instrumentation.

Like the other two scores, the Shrek the Third score album is full of short cues and feels a bit disjointed. That having been said, Gregson-Williams did a great job in expanding the musical scope of the Shrek universe and also brought it back to the original sound with the use of Powell\'s acoustic and solo cello themes from the first film. Fans of the Shrek scores or any of Gregson-Williams\' animated work will like this.