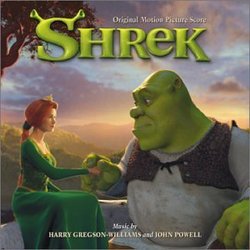 The box office smash for the summer of 2001, Shrek (in a nutshell) is the computer animated story about an ogre, Shrek (voiced by Mike Meyers) who begrudgingly teams up with Donkey (voiced by Eddie Murphy) to rescue Princess Fiona (voiced by Cameron Diaz) for the short natured Lord Farquuad (voiced by John Lithgow) so that he can have his swamp cleared of banished Fairy Tale creatures. Filled will lots of humor and satirical moments, the moral of the story in Shrek is that beauty is truly in the eye of the beholder, and it's what is inside us that matters. Teaming up for their third DreamWorks animated film are composers Harry Gregson-Williams and John Powell. Their previous efforts, Antz and Chicken Run proved to be a rousing success musically, and Shrek is no exception.

The album plays through in chronological order, and given the nature of animated film scores, there are plenty of short cues to be found. Starting out with the main Fairy Tale theme in "Fairytale", this deceptively simple melody shows up throughout the score, either with a flute or female soloist, and works just beautifully. First heard in "Donkey Meets Shrek" is another theme that tends to underscore the relationship between Shrek and Donkey. Multiple cues are really just interstitial underscore ("Ogre Hunters / Fairytale Deathcamp," "What Kind of Quest," "One of a Kind Knight," and others), they all help propel the storyline forwards. From the sad melancholy of Shrek's solitude ("Eating Alone"), to the dark dramatic introduction of Lord Farquuad ("March of Farquaad"), to the conflicted emotions within Princess Fiona ("Better Out Than In / Sunflower / I'll Tell Him," "Fiona's Secret"), this score really does cover most of the spectrum.

A few tracks of note include the two songs on the album. "Welcome to Duloc" is a hysterical little "Small World" knockoff (written by Mike Himelstein and Eric Darnell), and "Merry Men" is a take on Broadway, including small jabs at "Riverdance" and "West Side Story" (written by Kirby Tepper, Andrew Adamson and Conrad Vernon). "Escape from the Dragon" is a brilliantly executed action cue melding the orchestral action with a Propellerheads techno beat that is almost "James Bond" in style. A moment that had me laughing painfully in the film (and is almost as funny on the album) is "Singing Princess", an upbeat take on Snow White and the Seven Dwarfs where Princess Fiona sings to a bird—with deadly consequences. Coming towards the end of the album is Powell's rousing "Ride the Dragon," a large-scale heroic rendition of one of Gregson-Williams' themes, bursting with choir and orchestra.

Running about 45-minutes long, Shrek original score album was a delightful listen, worthy of repeated play. Thematically robust and emotionally solid, Harry Gregson-Williams and John Powell have succeeded in creating not only a musical fairytale world turned upside-down, but infused it with plenty of heart and warmth. If you enjoyed the film at all, then there's a pretty strong likelihood that this score belongs in your collection.