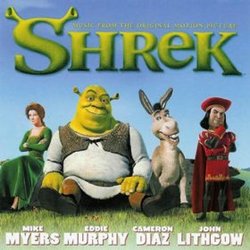 Shrek is a groundbreaking animated film that delivers laugh after laugh in either the form of snappy dialogue or cute gross out humor (this is a family movie after all). This is a modern day anti-fairy tale that pokes fun at almost every story we ever heard growing up as kids. The story focuses on Shrek (voiced by Mike Myers), who is a big green ogre that enjoys his privacy living alone on the swamp. One day the ruler of the land, Lord Farquaad (John Lithgow), decides to make all fairy tale creatures illegal and evicts them from his kingdom to the swamp where Shrek lives. Furious at this invasion of his land and privacy, Shrek strikes a deal with Lord Farquaad that allows him to reclaim his swampland if he rescues a princess in distress. Along the journey that unfolds Shrek picks up a sidekick donkey (Eddie Murphy) that never stops cracking jokes and discovers he has deep feelings for Princess Fiona (Cameron Diaz) whom he was sent to rescue. What unfolds next is a story that can't stop from being warm and fuzzy yet simultaneously hilarious with your classic "happily ever after" ending.

If you are a fan of orchestrated soundtracks this album will only tease you with a 3-minute medley of score excerpts on the final track, "True Love's First Kiss." DreamWorks, which in the past has always released original scores for its animated films, has decided to fill the rest of the album with songs from groups like Smash Mouth and Eels. The result of this is an album that is fun but not entirely reflective of the beauty and imagery of the film it represents.

Smash Mouth performs a hip and edgy cover of "I'm a Believer," but I tend to favor Eddie Murphy's reprise of the same title, which is far more memorable and entertaining. Smash Mouth makes a second appearance on the album with their overplayed hit "All Star." Although Shrek is the 3rd or 4th soundtrack appearance for "All Star," the song is used in the opening credits as we watch Shrek begin his daily ritual of dancing around in a shower of swamp goo and brushing his teeth with bug guts—quickly setting the fun-loving mood of this film.

There are some other noteworthy artist appearances on the album. "Best Years Of Our Lives," performed by The Baha Men is a Caribbean pop mix that will redeem the group for letting the dogs out earlier in the year. Also, The Proclaimers have again risen from mainstream obscurity to please us with their rock-folk tune entitled "I'm On My Way.".

Although there are several songs on this soundtrack I wish they had replaced with white noise, a handful of "unplugged" songs help to capture the beauty and romance that is a key point in the tale of Shrek. For the solo "Hallelujah," Rufus Wainwright uses nothing more than a piano and voice to bring the audience to tears during one of Shrek's most touching and trying scenes. Jason Wade strums an acoustic guitar for "You Belong To Me," which is sure to make its way into the playlists of slow dancing couples everywhere. "It Is You (I Have Loved)," performed by Dana Glover, is laced with woodwinds and drumbeats akin to something Celine Dion would have boasted if she hadn't "retired" so early. This song was played as the ending credits rolled and it is the only song in the collection based on the main love theme in the orchestral score, written by Harry Gregson-Williams and John Powell (with Gavin Greenaway for the song).

Although DreamWorks has created a soundtrack with a mix of songs that will touch the hearts of young and old just as Shrek did, your collection will not be complete until they release the entire score and give composers Harry Gregson-Williams and John Powell the credit they deserve.