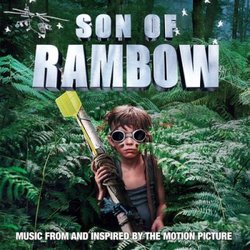 Two years ago, upon searching for information regarding Garth Jennings\' latest project following the wonderful Hitchhiker\'s Guide to the Galaxy, I came across a fairly short description for Son of Rambow. Truth be told, based on the blurb I read, I wasn\'t impressed at the time. I was, however, very happy to see Joby Talbot back on board to compose the score. His music for Hitchhiker\'s Guide was some of the freshest material I had heard in years, and I was confident that the continued collaboration between Jennings and Talbot would, at the very least, produce a score that would make Son of Rambow somewhat enjoyable.

Two years later, I\'m happy to report that Son of Rambow is not only accompanied by an amazing score, but it is also my favorite movie of 2008 thus far. The film tells the story of two young British boys in the early ‘80s who couldn\'t be more different from each other, but who end up making a film together after seeing First Blood. As the story unfolds, you learn about the backgrounds of these two youngsters – Lee Carter is a bully whose parents are never home, and whose older brother seemingly doesn\'t care about him; Will Proudfoot\'s father has recently died, and his highly religious family is part of a sect known as The Bretheren. Despite their differences, they form a friendship while making their film which, to quote Russell Brand, is chock full of youthful folly, jubilance, and hijinks.

The beginning of the album is packed with some familiar ‘80s classics, including \"Close to Me\" by The Cure, \"Cars\" by Gary Numan, and \"Our Lips Are Sealed\" by Fun Boy Three. These songs greatly enhance the listening experience, transporting those of us who lived through the ‘80s back to that time period, and introducing those who didn\'t to some classic songs that deserve their time. The placement of these songs at the start of the album helps set the tone for both the score that follows, and the film itself.

The brilliance of Talbot\'s score is twofold. First, the execution is perfect. The music is big when it needs to be big, but it\'s also thoughtful, introspective, intimate, and at times quiet. When put against picture, the score is appropriate and effective without being overbearing. On its own, it is an extremely satisfying and enjoyable listening experience.

Second, Talbot weaves the main theme for the movie throughout the score in as many ways as he can – and it works. \"The Best Day of All Time\" introduces us to the main theme for Son of Rambow, and is one of the catchiest I\'ve ever heard. It\'s big, it\'s zany, it\'s inventive, but most importantly, it\'s fun. \"Bicycle Ride,\" with its wavy strings, snare drums, and whimsical tone, also incorporates Talbot\'s theme for the movie, and is probably my favorite cue on the whole album. This theme is also used, not only to describe the plight of the boys as they make their film (\"First Day Filming\"), but to heighten moments of tension and danger (\"Scarecrow\" and \"Disaster\"), to underscore the film the boys make (\"Son of Rambow\") and, believe it or not, to evoke the touching moments that these two friends share as they embark on this experience (\"Can You Fix It?\").

The remaining cues are a lot of fun as well. \"The French Kid\" is an all-too-short, slightly hypnotic piece describing Didier, a foreign exchange student from France, who builds a small following of English brown-nosers due largely in part to his perceived coolness. There\'s also \"I\'m French, Non?\" in which Didier asks Will to be involved with the film. The emotion comes to a wonderful and satisfying climax in \"The Sad Day,\" when all of the foreign exchange students leave to go back to France. These cues add flavor, character, and a certain sweetness to both the film and the soundtrack without being overly sappy or saccharine.

So, why five stars? Perhaps I\'m sentimental. I grew up in Europe during the \'80s, and remember very well the English culture at that time. This film captures the time period in a way that I haven\'t seen before. It\'s flawless, really. More importantly, though, the blend of songs and score on this album make both an enjoyable and essential addition to anyone\'s soundtrack collection. As an avid collector and listener of soundtracks and scores, I\'m excited to hear what Mr. Talbot has in store for us next. As a filmmaker, I hope like crazy I get the opportunity to work with him.