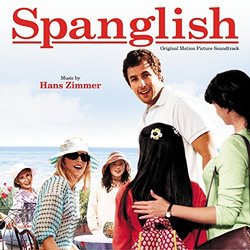 While Hans Zimmer's music for romantic comedy film is less widely known than his blockbuster action scores, it showcases a different side to the composer's talent. Zimmer's skill at writing for string ensembles is audible in scores such as Gladiator and Tears of the Sun, but hidden behind the heroic themes and pounding action music. In his music for the Academy Award nominated As Good As It Gets and the Golden Globe nominated Spanglish, his music is stripped down to light, layered strings, piano, and woodwinds underlying intricate solos by guitarist Heitor Pereira.

The score to Spanglish fits the film well, balancing the Latin sound of Pereira's solos with a lighthearted and, at times, dramatic underscore. "Welcome to the Claskys" features both Pereira and cellist Martin Tillman in a playful, upbeat cue, "Drunk and Disorderly" slows the pace down a bit. "No Left" picks up the pace with a Latin dance cue with plucked strings and tapping percussion. The score closes with "Bus Stop", which brings all the orchestral and solo elements together. The album ends with a version of "They Can't Take That Away From Me", which really has no place on the album, but can easily be skipped. Some of Zimmer's best writing is sometimes hidden within his larger scores, but Spanglish provides a nice glimpse at the composer's lighter side.