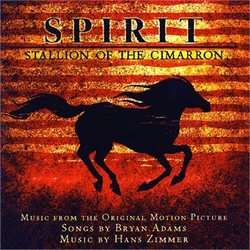 Spirit: Stallion of the Cimarron

Review: Spirit: Stallion of the Cimarron

For Spirit: Stallion Of The Cimarron, Jeffrey Katzenberg's latest attempt to unseat former employer Disney at their own animation game, Dreamworks' court composer Hans Zimmer has teamed up with singer / songwriter / Canadian Bryan Adams. The resulting hour-long soundtrack (mostly songs, with a little score) is as strange and uneven a combination as the two musicians who shepherded it.

Adams offers up his usual brand of uber-vanilla pop rock, with lyrics so earnest they somehow manage to sail clear past triteness back into merely quaint. (Kinda like when you run Super Mario all the way off one side of your video game screen, only to see him pop up again on the opposite.) Still, one can't help but feel the corporate-level "safeness" of choosing the relatively banal Adams for this type of big budget family entertainment. Makes me wish they could get Peter Gabriel to do one of these things. But I digress.

"Here I Am (End Title)" begins the disc with a suitably propulsive backbeat, but even as the listener moves barely beyond it (to "I Will Always Return" and the vaguely catchy "You Can't Take Me") the songs cannot help but sounding very, very similar to say the least. My first big wince-a-thon came with the corny "Get Off My Back", probably the worst song Don Henley never wrote. It's chorus of "get off of my back / get into my game" stirred fearful memories of Billy Ocean's title track for the Corey Haim vehicle License To Drive. Yikes indeed.

Zimmer's warm orchestrations can be heard simmering just beneath the surface of ballads like "Brothers Under The Sun" and "Sound The Bugle", definitely two of the better songs here. Ditto that sentiment for "Don't Let Go", a duet with Sarah McLachlan based on a very Tangerine Dream-ish repeating synth figure. But the sad state of affairs with this disc is that it's mostly Adams' game, and he's mostly boring.

True, "This Is Where I Belong" could be a classic Media Ventures anthem. That is, if it didn't have Mr. Adams' signature rasping floating on top of it like so much, err, "stuff". The album's second arrangement of "Here I Am" is also a victim of the same good news / bad news paradigm that plagues this disc in general. Can't imagine that's gonna make too many film score buffs jump for joy. When Zimmer shines, his fans will love him here as much as they ever have. But it's not that often.

As mentioned before, the disc has about twenty minutes of stand-alone score by Zimmer, and it's zippy, tuneful material. "Run Free" has some great major key momentum in the tradition of Zimmer's past action work. Finally, forty minutes into the proceedings, "Homeland (Main Title)" delivers a vocals-free, classic Zimmer cue. Fans of Backdraft will be chomping at the bit, if you'll excuse the bad horse movie joke. The brief "Rain" provides some bouncy, True Romance-lite romantic fare, while the seven minute, acoustic guitar-driven "The Long Road Back" packs all of Zimmer's major thematic cells into one long cue. It's all nice, well-produced music. But at a scant twenty minutes, it's hard to wholeheartedly recommend this disc solely for Zimmer's contributions.