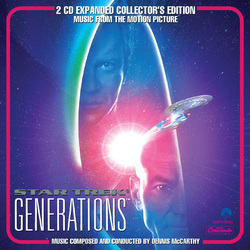 GNP Crescendo Records continues its commitment to Star Trek fans with the first-ever release of Dennis McCarthy's complete score for Star Trek: Generations (1994). This 2 CD collector's edition features the complete film score on disc one (including music for one scene deleted from the finished film), and a remastered version of the 1994 GNP soundtrack album (and its innovative sound effects library) on disc two.

Generations' atypical (for Star Trek) mood of melancholy, contemplation and—ultimately—uplift was captured by the composer who has scored more hours of the modern-day Star Trek television series than any other, Dennis McCarthy. Relishing the opportunity to work with a large orchestra and a more cinematic vocabulary, McCarthy used a broader, more melodic palette befitting the big-screen presentation.

From its innovatively gentle main title music to its traditionally heroic themes, from its haunting choir-infused music for the Nexus to its strategically spotted quotes of Alexander Courage's Star Trek fanfare, McCarthy's score both honors tradition and brings a fresh new voice to the Star Trek universe.

The accompanying 16-page booklet includes informative notes by Jeff Bond and Lukas Kendall and is lavishly illustrated with film stills. A track-by-track commentary for both discs by John Takis is available online at gnpcrescendo.com/generations. Star Trek: Generations—2 CD Collector's Edition (GNPD 8080) is a limited edition of 10,000 units.