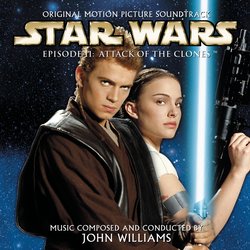 It's hard to believe three years have passed since John Williams graced us with his score to Star Wars: Episode 1 - The Phantom Menace (hereafter referred to as TPM).  With a slew of new themes, including the quite impressive "Duel of the Fates", TPM satisfied the craving that most Star Wars fans had been dealing with since 1983 (or 1997's "Special Edition" of Return of the Jedi, if you want to get technical).  Unfortunately, it was also, for the most part a music editing nightmare.  The "Ultimate Edition" soundtrack release provided a tangible example of the hack job that was applied to Williams' score, and even though it provided almost all of the missing music, it was quite literally an album that was as edited and choppy as the film from which it came.  Now, three years later, the next chapter in the Star Wars saga is here: Star Wars: Episode 2 - Attack of the Clones (AOTC).  While the plot and storyline help provide the necessary back-story for the original trilogy, and the visuals are stunning, the film is lacking severely in the areas where it matters most: dialogue and acting.  Granted, people don't go to a Star Wars film for the acting or the dialogue - but at the very least, it's reasonable to expect relatively fleshed-out characters that don't feel like they're just going through the motions.  I won't focus on the problems with the film, though - I will focus on the score, and more importantly, the soundtrack release.

Ultimately, Williams' score worked in the film - it helped aid the action on-screen, and was never obtrusive or out-of-place.  Certainly there are a few questionable choices - but whether they were Williams or George Lucas, well, I honestly don't know.  Thematically, AOTC only has one major new theme: the love theme.  It's a great theme, and when heard in its full "concert" version ("Love Theme from Attack of the Clones"), it's truly a sweeping piece evoking romance tinged with tragedy.  It is, in a nutshell, a great Star Wars theme.  But the rest of the album, while filled with some great moments of drama and action, tends to rely on previously existing themes from the other films.  Those moments work great on the album, but in the film the result is somewhat mixed.  For instance, "Duel of the Fates" shows up ("Return to Tatooine") when Anakin goes searching for his mother.  The Trade Federation theme (from TPM) shows up when Obi-Wan is examining the clones ("Bounty Hunter's Pursuit").  And none of that takes into account the music editing in the film, which rivals TPM in terms of how hacked it feels.

Williams composed a great action chase cue ("Zam the Assassin and The Chase Through Coruscant"), that pays homage to Tan Dun, and the questionable use of electric guitar aside (it's nearly impossible to hear in the film, thankfully), this cue is truly a riveting piece of score.  It does show up again in the film during the Conveyor Belt sequence, but that should be nothing new by now.  "The Meadow Picnic" is a nice playfully romantic cue that takes advantage of the Love Theme, and turns somewhat dour towards the end.  "The Tusken Camp and The Homestead" covers the pinnacle scene where Anakin lets his anger overtake him, and Williams does a nice job with swirling strings to reflect the conflict within.  His brief statement of the Imperial March is certainly foreshadowing future events (of course), but that theme is used later in the film ("Confrontation with Count Dooku and Finale") to represent the Republic's new army (later to become the Imperial Army).  So I feel as though the straightforward use of lietmotif established in the original trilogy is steadily being chipped away in this new series of films. No longer does a theme truly represent a particular character.

"Love Pledge and The Arena" is the other great action cue on the album.  After a statement of the Love Theme, the action begins, and Williams doesn't really hold back.  Orchestral bombast intermixed with small military-influenced motives - and a few classic Star Wars themes - make this 8.5 minute cue a great one to listen to.  In the film, though, a rather lengthy segment of this battle sequence in the arena is actually tracked with music right from TPM.  Eesh!

The album ends with "Confrontation with Count Dooku and Finale" which contains swirling strings (ala The Empire Strikes Back), and a haunting female soloist.  Missing from the cue (but in the film) is the prominent statement of the Emperor's Theme.  After a dramatic rendition of the Imperial March segues into a sweeping rendition of the Love Theme, the classic "End Titles" sequence begins. Here we hear the Love Theme in it's "concert form", but there's a little bonus at the end - we get a snippet of Anakin's Theme from TPM (it showed up in the film - but not on the album until this point), followed by a tender statement of the Imperial March. (Yes, more foreboding - we get the idea.)

As an album, this is a really enjoyable listen.  While there aren't as many new themes as I would like, I still think that the Love Theme is one of the strongest themes Williams has written lately, and it will certainly go down in history as a classic theme. I just hope he uses it more in Episode 3.  As far as the film, though - it's enjoyable and fun, but riddled with problems.  Unfortunately, the score seems to have been a bit of a casualty, and I honestly cannot see how releasing an "Ultimate Edition" would really work - but we shall see.

(On a side note - there has been a lot of flack regarding the release of a special "bonus track" on certain CDs, found only at Target Stores. This bonus track is for the Conveyor Belt sequence, and with the exception of the first and last 45-seconds, wasn't used in the final film. But why release it to a particular store only? That just pisses off the fans.)