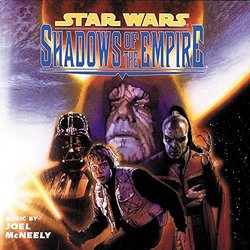 Star Wars: Shadows of the Empire

A long time ago, in our very own galaxy, the Powers That Be decided to authorize the creation of a multimedia premiere: an official Star Wars story, set between The Empire Strikes Back and Return of the Jedi, shaped by a book, a computer game, and an orchestral score. The score itself, while drawing a freeform inspiration from the novel's set-pieces, would be edited down to accompany the player throughout the game. What is fascinating about this whole merchandising bonanza is two-fold: John Williams was not tapped for the project and the resulting score is actually good. Not only is it good, but it surpasses the muddy and overly-frenetic action writing of the prequels by offering the lucky listener orchestral might and a choral tempest to rival that of Revenge of the Sith.

The composer, trespassing on quasi-religious ground, is none other than Joel McNeely, whose résumé, while diverse, boasts a number of adventure and science fiction scores (The Young Indiana Jones Chronicles, Soldier, and the TV series Dark Angel). The liner notes for Star Wars: Shadows of the Empire tell us that McNeely does not quite view his work here as a film score; "unlike with film music, I have been allowed to let my imagination run free with the images, characters and events from this story." The resulting work showcases the talents and abilities of the composer to write music for a specific universe while imbuing it with a bombast and shear force that Williams himself has let go of in recent years, taking the characters and locales seriously and crafting an immensely powerful dramatic orchestral set.

The album opens with, what else, the Main Title from Star Wars, which takes us into "Leia's Nightmare", a piece originally composed by John Williams for the carbon freezing sequence from The Empire Strikes Back. The first original piece is called "The Battle of Gall". In the book, Boba Fett's ship, carrying the carbonite-encased Han Solo, has been spotted at the Imperial enclave of Gall and the Rebellion musters its best pilots to engage the Star Destroyers in an effort to rescue him. No Rebel Fanfare, no Imperial March, no Luke's Theme; instead, McNeely crafts his own themes and motifs in a powerhouse of a cue with resplendent brass, militaristic snare runs, and frenetic violins. The childish glockenspiels and xylophones, hallmarks of the original Star Wars scores, are not left behind, but are better integrated and don't detract from the seriousness of the material. "The Imperial City" follows, with its magical and sweeping brass fanfares and calls-to-arms reminding us of a classical piece on par with Gustav Holst's work on The Planets. The brass players are flawless and the resounding drums and cymbals give the performance the royal impact it deserves as we are treated to a grand tour of the Imperial City on Coruscant.

The character of Xizor, a reptilian usurper trying to avenge his family's death by becoming the Emperor's right hand, is given a theme that can hold its own with the likes of the Imperial March and the Emperor's Theme. It is introduced in "Xizor's Theme" with dissonant trumpet blasts, Arabic woodwind arpeggia, and rattling chains. But the theme itself is only fully fleshed out near the end, over a rapid bed of ethnic percussion, a hummable ode to corrupt power occasionally ascending to almost-Classical heights. This album highlight is immediately followed by the ingenious "The Seduction of Princess Leia", Xizor's courtship of the princess which is treated like an operatic waltz, hesitant at first, then out of control by the end, overpowering the listener with its shear hopeful idealism and romanticism.

"Night Skies" is a much more introspective cue, showing us Xizor's nocturnal ruminations through the use of a pheromone motif entwined in a subdued choral beauty, giving way to Xizor's full theme on the oboe. The scene moves on to Darth Vader himself, represented by a stately performance of the opening notes of the Imperial March. As he reaches out to his son, we hear the only use of the Force Theme on the album: it opens with a solo French horn, reminding us of A New Hope, but is then completed by the combined might of every section of the orchestra and choir. This is the way the theme always deserved to be treated.

The last cue on the album, "The Destruction of Xizor's Palace", is McNeely's chance to bring all of the elements he's created, be they rhythmic, melodic or instrumental, to a boil. After the Rebels implode Xizor's palace on Coruscant, the reptilian traitor takes the battle to his Skyhook in orbit around the planet where his forces, the Rebel Alliance's, and the Empire's clash in a carefully-organized sonorous cacophony. No changes in tempo every two seconds, no absurdly-complicated dissonant woodwind runs; just clear, impactful writing that makes strong use of incidental themes, the Imperial March, Xizor's Theme, complex harmonies, varying dynamics, and a choral ensemble chanting a violent poem called "Dha Werda Verda". The ten-minute action sequence concludes with McNeely's own Rebel Fanfare, a celebration of the major mode.

The writing is unabashedly Romantic in inspiration and follows in Williams' footsteps from the original trilogy, McNeely putting his own spin on that galaxy far, far away with a frequent use of dissonance, bass drum and cymbal crashes, and the anger of a decent-sized choir. The only regret comes from not hearing nearly enough of Williams' quintessential themes from the saga, especially since McNeely's Force Theme treatment reveals his strong grasp on how to present a theme with a maximum wallop. While it may seem sacrilegious to compare Shadows of the Empire to Williams' own original trilogy, it does become relevant especially in light of The Phantom Menace, Attack of the Clones, and Revenge of the Sith. While the music there is quite often all over the place, McNeely presents his take on the Star Wars universe with an orchestral cohesion that is more than welcome. Star Wars: Shadows of the Empire is a hidden gem: to listen to it with an open mind is to secretly wish Joel McNeely had been in George Lucas' radar when he started dreaming of Trade Federations and droid armies.