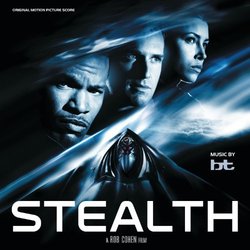 This is the first score I\'ve ever listened to that gave me a headache afterwards. Granted, it is a futuristic military action film, but the amount of electronics used in the mix make the score loud and harsh. There are some good musical ideas here, but after the remixing for the final product, they are basically lost. The best cue on the album is "The Pilot\'s Theme", a bold brass theme with rapping snares backing it, which gets a nice heroic reprise in "Hellava 1st Mission". Overall, the score sounds a lot like some of Trevor Rabin\'s action work, but, believe it or not, is even heavier on the electronics.

Most of the album is a similar tone of noise. At one point, for three cues taking place in the fictional country of Tajikistan, a male vocal is thrown in for an added ethnic element. While it is an odd choice for that, these are three of the better cues because the electronics are cut down to allow the vocals to be heard. A bit of orchestration comes in towards the end of the album for the last twenty seconds of "Death of Col Yune" but it is too little, too late. The last cue pulls together the brass themes in a cliché finale "sound" and then repeats the vocals. If you want a fast paced, loud score, you can\'t get any louder, Stealth might work for you - but most of the musical ideas were unfortunately lost amid the heavily mixed electronics.