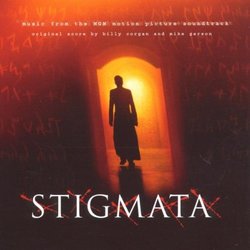 In the supernatural thriller Stigmata, Patricia Arquette is Frankie, a Pittsburgh hairdresser who is afflicted with stigmata. Gabriel Bryne is Father Andrew, the investigator for the Vatican who is sent to Pittsburgh find out if her afflictions are real or not. It is a very stylish, very creepy film that poses the question: how far would the Vatican go to cover up proof that was contrary to its doctrine?

The music in Stigmata was very prevalent, and Virgin Records had the honor of releasing the soundtrack to the film. There are a few songs by Bjork, David Bowie, Natalie Imbruglia, and others, and score by Smashing Pumpkins' Billy Corgan. Oddly enough, the score that Elia Cmiral (Ronin) wrote wasn't included on the soundtrack, but it should be noted that his contribution to the film is invaluable.

Most of the songs aren't truly notable, except for Bjork's "All Is Full Of Love" (which has, incidentally, a very cool music video) and Imbruglia's "Identify". (That isn't to say that the other songs aren't good - they merely didn't do anything for me.) The bulk of the CD is comprised of Corgan's score, which is very creepy. It has very little orchestral elements - there is a lot of guitar, synth, piano, electronic effects (a lot of those!) and percussion. Some of the tracks are very cacophonous, and while they aren't the best tracks to listen to, they work very well with the montage imagery in the film. Other tracks are very quiet, with a solemn choir (synthesized) and soft piano. Overall, there is a large hip-hop rhythm to the music, and at times it feels formless, but trust me - in the film, it works perfectly.

Stigmata was one of the few films this year which met my expectations - most have fallen short. I was in the mood for a supernatural mythological religious picture (ala The Omen or The Exorcist) and Stigmata was a refreshing and unique film in a year where most pictures seemed to fit the status quo. If you can, definitely go see this film- you won't regret it.