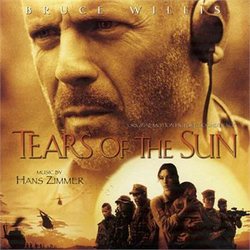 Tears of the Sun

Review: Tears of the Sun

Hans Zimmer is often criticized for using too many additional composers on his film score projects. Whatever his method, Zimmer has composed some of the best film music of the past decade, with prime examples including The Lion King, Gladiator, and The Thin Red Line. For Tears of the Sun, Zimmer drew upon multiple musical talents to create his score and credited them with their contributions rather than list them merely as featured musicians. In the mix we have vocalists Lisa Gerrard (Gladiator) and Lebo M (Power of One, The Lion King), electric cellist Martin Tillman (Black Hawk Down, The Ring), Heitor Pereira (Mission: Impossible 2) and harpist Andreas Vollenweider. Additionally, composers Steve Jablonsky and James Dooley are also credited with certain cues in collaboration with the above-mentioned artists.

The end result is not a mismatched mix of unrelated cues. Zimmer\'s writing, which does comprise most of the score, is solid enough that the added musical ideas help to add depth to the score. Varese Sarabande\'s album release is structured almost as a classical CD with musical ideas, Yekeleni and Kopano, broken out into parts. Over the course of the album, the music builds from quiet vocals over a soft acoustic guitar to a stunning, drawn out, orchestral and African song finale. Tears of the Sun acts as a score for which Zimmer melded together many ideas that permeated many of his previous works. The final production is a cohesive album of music that represents both the pain of the African people seeking peace and freedom as well as the American soldiers\' struggle through enemy territory to rescue the African refugees against their orders.

What holds the score together are the two musical ideas (Yekeleni and Kopano) which are in the form of African songs co-written and performed by Lebo M (the lyrics for which are printed in the album booklet). "Yekeleni Part I / Mia\'s Lullabye", composed by Jablonsky and Gerrard, opens the album with light guitar by Pereira backing Lebo M\'s vocals. The tone quickly shifts as Tillman\'s cello, percussion, and Gerrard\'s haunting vocals enter the mix. This is continued a few tracks later in "Yekeleni Part II / Carnage" which segues into the Thin Red Line-esque part of the cue, "Carnage". One might get the impression that Zimmer meshed together recycled music from many of his other films, but that is not what I mean. There are a lot of ideas from his past work, but the result is a new sound, especially for a war film. Sure, Tillman\'s cello from Black Hawk Down sounds the same, but it is used here more as a grim undertone than a featured instrument. Gerrard sounds nothing like she did in Gladiator; I think she performs on this album in a different octave and compliments Lebo M\'s lower range nicely.

The song "Kopano" appears in three parts. Opening with "A Small Piece for Doumbek and Strings", which is pretty much what it says with some vocals mixed in (a doumbek is a Near Eastern drum), "Kopano Part I" starts with a beautiful string ensemble that showcases Zimmer\'s growth as a composer. The cue is quiet and closes out with Gerrard\'s vocals. "Kopano Part II" begins in a similar fashion, but takes on a stronger vocal presence. This builds up to the final segment of "Kopano", performed by Lebo M and choir, which plays over the end credits. This song brings together the musical ideas from parts I and II into a full song that draws out the life and freedom of the refugees the American soldiers rescued. In addition to Kopano and Yekeleni, Tillman and Dooley\'s "Cry In Silence" takes on a darker, electronic sound, while Vollenweider and Pereira\'s "Under the Forest Calm" is a lighter, acoustic tone.

I mentioned before how the album builds into the climax. This picks up in "The Jablonsky Variations on a Theme by HZ", which is the build up to the finale, "Cameroon Border Post". Jablonsky uses heavy percussion and Gerrard\'s vocals to segway into Zimmer and Lebo M\'s explosive conclusion. "Cameroon Border Post" is an action, cue, but it is very unlike most of Zimmer\'s other action pieces. It takes the meandering brass themes he used so well in The Thin Red Line, but here it is combined with Lebo M\'s vocals, strings, and racing heavy percussion. It explodes out of Jablonsky\'s cue with the French horns picking up the theme that was hinted at through the first parts of the score and Lebo M\'s cries that accompany the desperate dash to the border. At one point at about the halfway mark through the cue, Gerrard comes in as the rest of the music stops. Her voice crescendos into a burst of percussion that gives way to the full main theme. The remainder of the track winds down from this climax.

From the quiet opening of simple acoustic guitar and soft vocals, the music comes a long way to "Cameroon Border Post". Tears of the Sun exhibits Zimmer\'s growth, not only as a composer, but as a producer. He could not have written this score ten years ago because he utilized the talents of musicians he had met over his numerous projects to add to his music. It\'s a score by Zimmer, but he acknowledged the collaboration in the credits. The end result is one of the most interesting scores to come out in a while with an odd blend of electronic and orchestral and vocal elements that bring to life the story in Africa.