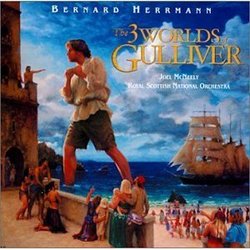 The 3 Worlds of Gulliver

Review: The 3 Worlds of Gulliver

Bernard Herrmann scored four films with Ray Harryhausen: Mysterious Island, Jason and the Argonauts, The 7th Voyage of Sinbad, and The 3 Worlds of Gulliver. This latter film featured a wonderful lyrical score and has since been re-recorded by Joel McNeely and the Royal Scottish National Orchestra. As with all of McNeely's Herrmann re-recordings, this one is of excellent quality, and worth taking note of.

Written in 1960, the same year he worked on his famous score to Psycho, The 3 Worlds of Gulliver begins with a triumphant march ("Overture") that is rather regal in theme, an appropriate choice considering that Gulliver will be encountering many heads of state in his journey. "The Storm" is a rather turbulent rendition of the main march, with swirling strings and bombastic orchestra hits. The march idea continues in such cues as "War March", "The Naval Battle". A rather classical tone to the score, as heard in "Minuetto" and "Trio Refrain" is an apparent result not only of the time that the story takes place (in the 18th Century), but also due to Herrmann's love of the time period. "The Trees" is another good example of the processional approach he took to some of the cues.

There is also a romantic theme in the score, as heard in "Duo" and "Nocturne". It is tender and lush, with heavy strings. "The Oath" contains high soft strings that lend a bit of eeriness to the cue. This isn't surprising, Herrmann is after all the master of the dark and brooding cues, many of which show up in "The Shadow" and "The Chess Game". Tense action accompanies "Pursuit" with staccato horns and pounding timpani lead to gentle resolution in "Happiness".

I keep finding myself commenting on how wonderful a job Joel McNeely does in re-recording these Herrmann scores, and this album is no exception. The sound quality is expansive and deep, and with a running time of almost 50-minutes, this is a triumphant Herrmann score that should be added to your collection. But then, what Herrmann score shouldn't?