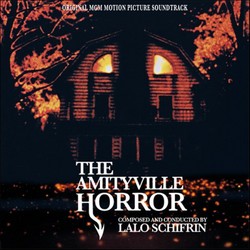 World premiere release of the complete Oscar-nominated score for the 1979 horror classic The Amityville Horror, composed and conducted by Lalo Schifrin.

At the time of the film's premiere, AIP Records released an LP that included only about 20 minutes of Schifrin's masterfully disturbing score—plus some source cues and a disco-boogie version of the main theme produced by Alan Douglas. Almost 25 years later, a re-recording made in Prague and conducted by Schifrin himself appeared on the market, but it was not well-received by fans due to the alteration of some tempi and the fact that some cues had been reconstructed in suite form. The actual soundtrack as such has remained unreleased—until now.

For years the original recording tapes had been thought lost, along with the AIP album master. But miracles sometimes happen, as with the discovery of a set of 1/4" monaural tapes of the complete score, courtesy of MGM. Even more amazing was the recent discovery of a set of 1/2" stereo tapes, which (although incomplete) cover almost 70% of the score, including all the key tracks. Two source cues (the jazz-piece "Juke Box" and the adaptation of Bach's Concerto No.5 for Harpsichord and Strings) were missing from both sets of tapes, but fortunately they were included on the original LP and have been restored for this release from mint vinyl sources.