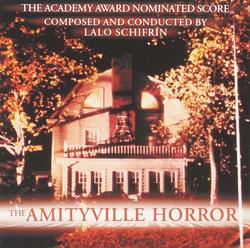 In the late 1970s, horror films were in the middle of a comeback. 1968's Rosemary's Baby helped start it; 1973's The Exorcist confirmed it. 1976 saw The Omen, and then in 1979, we got a film version of the bestselling novel, The Amityville Horror. Scoring the film was Lalo Schifrin, who had previously been hired to work on The Exorcist before his score was rejected. (Rumor has it that he worked elements of his rejected score into The Amityville Horror, although they sound nothing alike.) Previously released on 8-track and LP, Schifrin's score never got a full CD release until now, on his own Aleph Records.

Running a solid 60-minutes, this creepy score will pull you into a dark and disturbing world, where a children's choir masks the horror lurking in the possessed house. Based around a two-note theme, the score is pretty much non-stop suspense. Sure there are a few moments of calm introspection, but they merely lull you into lowering your defenses for the ensuing musical onslaught. Heavy on the strings and piano, Schifrin makes good use of the orchestra's ability to keep us on the edge. Tracks like "The Window" are a prime example of the complex yet accessible score that resulted in an Oscar nomination for Schifrin. Jon Burlingame's brief but informative liner notes provide a nice bit of background on the production and the score. Pick this one up if you're a horror fan - you can't go wrong!