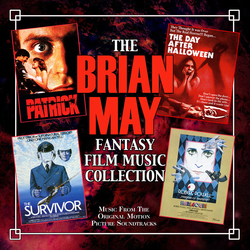 Dragon's Domain Records presents the soundtrack release of a 2 CD collection featuring music composed by Brian May for a select group of Australian horror/fantasy films during the boom of the Australian New Wave of cinema in the late 1970s and early 1980s.

For Patrick, May composed a lush-sounding symphonic score supported by ARP synthesizer. His score for The Day After Halloween (Snapshot) mixes dramatic orchestral music, with sublime romantic music and a fair amount of contemporary modern jazz. Harlequin was scored for a variety of atonal motifs for strings, piano, and percussion, giving thematic unity through a lush, string-based love theme. The Survivor is arguably May's most Herrmannesque score, opening with a main theme that recalls Herrmann's Hitchcock collaborations.

Previously released on compact disc by 1M1 Records in the early days of the compact disc format, Dragon's Domain Records is excited to bring the contents of this release back from the past, newly remastered by Digital Outland and presented together on two CDs.

On this release, Patrick is presented via a short seven-minute suite that encompasses the main elements of May's score. Because the previous presentations of The Day After Halloween (Snapshot) were markedly different, we have opted on bookending this collection with both versions of the The Day After Halloween (Snapshot) soundtrack. Disc 1 presents the 1M1 release, which follows the film sequence. Disc 2 consists of the version assembled for Citadel Records. This version was edited and sequenced differently, but because we like this presentation very much, we wanted to include it as an alternate assembly for your listening pleasure. Our presentation of the Harlequin score replicates that of the 1980 French MovieMusic vinyl release and the 1M1 CD. The Survivor appears as it did on the previous 1M1 release. The booklet includes exclusive liner notes written by author Randall Larson, with the participation of producer Antony I. Ginnane.