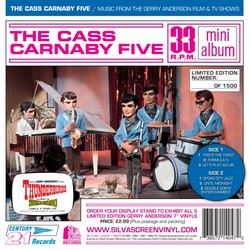 The Cass Carnaby Five is the last release in the series of 5 Gerry Anderson soundtrack EP's, pressed on clear flexidisc vinyl, with fabulous original music by Barry Gray and an exclusive poster.

They have been released regularly with The Cass Carnaby Five 7" hitting shops on Record Store Day. Customers can also purchase a special stand from Silva Screen to keep the set in!

The recordings have been carefully restored and edited from Barry Gray's own archives courtesy of The Barry Gray Estate and ITV Global Entertainment.

The series kicked off with the Thunderbirds EP, which was followed by Captain Scarlet, Joe 90 and Space 1999. We are now releasing the last limited edition 7", The Cass Carnaby Five, on flexidisc.

Each is a coloured vinyl, numbered, limited edition of 700 copies. 200 of these will be kept and sold as a complete set in MAY 2013, this will be at a premium price so collecting them as they are released is the way to go!! Just 500 of each single will be in worldwide circulation.